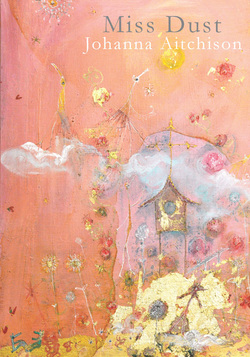 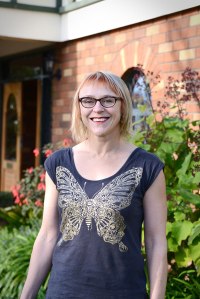 Johanna is a poet who was living in Palmerston North (quite a hub of poetry activity!) but currently in Iowa. I haven’t read her debut chapbook from Pemmican Press, Oh My God I’m Flying (1991), but I really loved her second collection, Long Girl Ago (Victoria Press, 2007). The poems felt fresh, playful, finely crafted, and surprising in the little revelations, particularly in the poems that placed little frames on Japan. The book was shortlisted for best book of poetry the following year. Johanna’s new collection, Miss Dust, was recently released by Seraph Press. It is a collection in two parts with many bridges between, and the freshness, the economy and the diligent craft remain a vital feature.

What catches me with these new poems is the heightened degree of surprise. This is poetry tilted on its axis. The first section is devoted to a sequence that gives life to Miss Dust. When read together, the section forms a long narrative poem, or perhaps you could say, a long character poem in pieces. In trying to liken the startling effect of reading this life, I came up with a hybrid analogy: it is like an Eleanor Rigby portrait meets a Salvador Dali painting meets a dislocating dream state meets a short film by Alison Maclean meets Edward Lear meets a veiled memoir.

The idea of dust is ephemeral — it leaves traces and smears, it veils and it clouds. Perfect word for a character that hides behind tropes, white space and poetic jump cuts. The tropes are borderline surreal (‘The curtains of her house are ash’). At dinner with her online date, he ‘ordered for her the dark.’ Yet even though things are strange, it is the effect of the bridges and the gaps that augment the mood, the portrait, the arc of a life. Take ‘Miss Dust and the Affair.’ The little leaps from one thing to the next, from one action to the next, miss the gritty details that might pepper confession, exchanged story. The poem is mysterious and haunting, but if you lift out the stepping stones (that occur on other occasions throughout the book) you get a terrific story of love lost: affair kiss lips lines waves rocks cheeks. That story is the undercurrent of the poem, hiding in the dust. Miss Dust, herself, would sum up the undercurrent with two words (‘black heart’), words that crop up in a number of the poems.

The movement between things is also surprising or disconcerting in the poems and feeds into the crucial threads of loss and love and life. In ‘Miss Dust makes a promise to her black heart,’ every line seems to offer a new twist —  the way the dreaming mind takes the ordinary and then skews it to show a deep-seated feeling pulsing through.

Here is the cure: sitting

on someone else’s carpet,

she makes herself a promise,

with the help of a chisel

and a block of A4 refill.

She chips out a beach scene

three streets away, hammers in

stones that warm or cool

You can’t just read this poem and walk away. It holds you tight as Miss Dust walks into the beach scene and ‘lowers the plunger/ onto one more set of grounds.’ There is that jarring kink between the scene carved (hope, therapy, cure) that catapults the black heart to elsewhere and the chore of making coffee. For me, the word ‘grounds’ flicks and shifts. Yes, the coffee is ground (the daily chore/grind) but also, like the beach scene, ground is another place to lay down roots. To tend damaged roots. Soil, black like the black heart. A single word, and you can set up camp for hours.

I don’t know of a sequence in New Zealand poetry quite like this (maybe I got whiffs of the early surrealness of Gregory O’Brien). Reading and lingering in the half light of Miss Dust, is utterly moving as you fall between the gaps of her life.

The second half of the book is not Miss Dust but there is a similar degree of surprise, little echoes that seem familiar (the half house), the dislocating and then relocating pieces, the way nouns and verbs startle (‘I’m starting to skin your loneliness Miss Shoulder’). There is a stunning Japanese poem, ‘Jun,’ that pulls you back to the previous collection with its final, breathtaking stanza.

in the class the students said do we count jun

Johanna has delivered a new collection that never lets the dust settle (excuse the pun). Each poem reproduces a glorious jittery, shimmery movement between things, between actions and between things and actions. At the core of that movement: feeling. Yes, you enter a world that is, at times, a little like the bewildering jumps and turns of a dreamscape, but just as with the dream, you fall upon cores of truth. Simple, everyday cores of truth that have as much to do with how you feel the world as how you see the world. I loved this collection.