the pākehā man
calls the kailoma Fijian woman
the Māori woman
and the ‘afakasi Samoan woman
privileged
because they have the experience
of being doubly oppressed
at a time when they qualify
for certain scholarships
when their demographic
is fashionable and interesting
their life experiences
make their writing more convincing
their stories are rich and deep
hot chocolatey and steamy
his are staid, North Shore-ish
lukewarmish gumboot tea 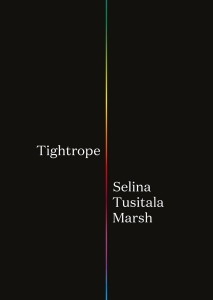 Note from Gina: I love this poem because I have attended many creative writing classes. I am also a kailoma Fijian woman, and I have been in a creative writing class with Selina. In most writing classes that I have attended, I have been one of a minority of Māori and Pasifika writers in the class. I love how the title reads as a play on each word in all their different meanings, especially “class”. I love the last stanza and the description of the women as “los atrevido”. I had to look up what that meant. I found that it translates as – the daring, the badass, the bold. I love that daring in the poem, and that Selina is the new daring, badass, bold Poet Laureate for Aotearoa.

Gina Cole is of Fijian, Scottish and Welsh descent. She lives in Auckland. She writes fiction and poetry. She is a Barrister specialising in Family Law and has a Master of Creative Writing from Auckland University. In 2016, Huia Publishers published Gina’s debut book of short stories Black Ice Matter. Black Ice Matter won the 2017 Hubert Church Prize for Best First Book Fiction at the Ockham New Zealand Book Awards.

Selina Tusitala Marsh is of Samoan, Tuvaluan, English and French descent. She was the First Pacific Islander to graduate with a PhD in English at the University of Auckland where she currently is an Associate Professor. Her first collection, Fast Talkin’ PI, won the Jessie Mackay Award for Best First Book of Poetry in 2010. As Commonwealth Poet (2016) she composed and performed a poem for the Queen at Westminster Abbey. She is New Zealand’s current Poet Laureate.

Congratulations to the winners, commiserations to those who missed out and hats off to Victoria University Press for an extraordinary showing. VUP is a strong supporter of local writing, publishing more poetry that anyone else without compromising on quality. Three cheers VUP! Hats off to all NZ publishers, large and small, who back local writers and books. We are in debt to you. Away from the glitz and flare of an awards ceremony, there is an active terrain of writing and writers. Hats off to that too!

And hats off to the winners! Enjoy this moment of well-deserved recognition by your peers.

This year’s four category award winners will appear at a free event at the Auckland Writers Festival: The State We’re In on Friday 19 May at 5.30pm in the Heartland Festival Room, Aotea Square.

The panel of judges — Bronwyn Wylie Gibb, Peter Wells, Jill Rawnsley and inaugural international judge the Canadian writer Madeleine Thien — said  “The Wish Child exposes and celebrates the power of words – so dangerous they must be cut out or shredded, so magical they can be wondered at and conjured with – Chidgey also exposes the fragility and strength of humanity … Compelling and memorable, you’ll be caught by surprise by its plumbing of depths and sudden moments of grace, beauty and light.”

The Wish Child, Chidgey’s fourth novel, comes 13 years after her last work, The Transformation, was published to critical acclaim. Chidgey’s previous novel Golden Deeds was chosen as a Book of the Year by Time Out (London), a Best Book by the LA Times Book Review and a Notable Book of the Year by the New York Times. Her debut novel, In a Fishbone Church, won a Commonwealth Writers Prize (South East Asia and South Pacific).

Her latest novel, published by Victoria University Press, is one of four Ockham New Zealand Book Awards category winners, selected by four panels of specialist judges out of a shortlist of 16, which were in turn drawn from 40 longlisted titles from 150 entries.

“The judges’ admiration for Andrew Johnston’s remarkable collection grew with each rereading, as its rich intellectual and emotional layers continued to reveal themselves … Using a minimalist couplet-form, the collection is at once philosophical and political, witty and moving, risky and grounded, while maintaining a marvellously varied singing line.

“To reward Fits & Starts with the overall poetry prize is to reward New Zealand poetry at its most impressive and its most promising.”

Ashleigh Young (Wellington) took the Royal Society Te Apārangi Award for General Non-Fiction for her collection of personal essays Can You Tolerate This? (Victoria University Press).

The category’s judges’ convenor, Susanna Andrew, says Young’s work sets a high bar for style and originality in a form that has very little precedent in this country. “Always an acute observer, it is in Young’s commitment to writing as an art that the true miracle occurs; she tells us her story and somehow we get our own.”

Young catapulted to international recognition earlier this year when she won the Yale University US$165,000 Windham-Campbell Prize for the collection.

“Putting women at the centre of our history, this sweeping survey shows exactly when, how and why gender mattered. General changes in each period are combined effortlessly with the particular, local stories of individual women, many not well-known. A wider sense of women’s experiences is beautifully conveyed by the many well-captioned artworks, photographs, texts and objects.”

The Ladies’ Litera-Tea is an annual event organised by bookseller taonga, Carole Beu, and the Women’s Bookshop: eleven authors, a full auditorium and an excellent afternoon tea with delicious cakes and savouries. It usually lasts about five hours if you include the book signings. I always come away with a bag of new books, often unexpected choices.

This year I felt like I was walking the fine line between voice and no-voice, with a fuzzy head and a sway that wasn’t to do with reading poems on stage. Luckily I was third up so delivered my poems and then sat back to listen. Usually I take notes to replay on my blog but all I seemed to do was doodle as a counterbeat to the feasts of words.

My head isn’t up to scholarly focus today so I am in bed blogging and reading.

Not sure why there were so many doodle birds. Birds were barely mentioned. Apart from Billy Bird. Or hats. Apart from the steampunks and their creative shed and steampunk hats.

First up was Catherine Chidgey talking with exquisite clarity about her new novel, The Wish Child. I loved the way she made something of obstacles and detours and can’t wait to read the book. Next up Helene Wong talking about: Being Chinese: A New Zealand Story. This is also on my must read list. It feels like essential reading particularly in view of the enduring racism Helene faces.

Helene recounted an anecdote that resonated (with a few details missing). She was at an undergraduate Chinese paper with a fairly indifferent bunch of students. The white middle-aged bloke started reading a poem in Cantonese. Helen was captivated by the undulating pitch and tones despite not understanding a word. She was struck by this ordinary white man’s pleasure in the Chinese language. His ‘gesture of respect astounded’ her. She almost ‘wept in gratitude’ that he showed so clearly Chinese culture is not to be ashamed of.

There is no right formula for authors on stage – especially in view of what to say. I can go either way – just hearing the work or also hearing anecdotes and inroads into the writing experience can hit the spot. I loved the way Emma Neale talked about lexical exhaustion on completing a novel. She borrowed a quote from a musical composer who replayed his piece when asked to explain his work. Emma said she had decided to let the extracts do the talking. I agree with Emma on ‘the joyous creative anarchic energy’ of Billy, the central character of her new novel, Billy Bird.  I have just finished this book and it is a top fiction read for 2016. So beautifully written, so moving, so funny, so gobsmackingly good.

The very lovely, very inspirational, Yael Shochat wrapped up the first half. She was celebrating the arrival of Ima Kitchen. I was hooked on the video of grandmothers in the kitchen in Israel making lunch. At half time, the queue for Ithe cookbook never stopped. Both cafe and book are terrific additions to Auckland’s eclectic food scene. We have had such a wide cultural culinary seasoning for decades and it adds so much to who we are as a city. When I arrived back from London in the 1980s my tastebuds were popping. Will be cooking out of this book tonight!

spinachy peppery cream on the tongue

(thanks Yael, so delicious)

A long time fan of Kerrin P Sharpe’s poetry it was such a treat to hear her read for the first time. I adore the mother poems in her new book, Rabbit Rabbit – the audience did too as it was oohs and aahs and beautiful (just as I heard after the lyrical fiction of Emma Neale). I also loved the entry points gave into the book as it provided me with new discoveries.

Having recently (two posts back maybe!) gushed to you about Ashleigh Young’s witty  debut collection of essays, Can You Tolerate This?, a highlight was hearing her read. She selected a section from ‘Big Red.’ I have quoted several times from this essay, so it felt like a favourite album was playing and I was word perfect. Wonderful!

Emma Neale and Gina Cole (in the 6pm shadows!)

I was hooked on Gina Cole’s ancedotes, lucidity, warmth and story extracts all pivoting on the “L” word: lighthouses, law, literature. Her new book, Black Ice Matter, went in my shopping bag! I want to post about this soon!

Janice Marriot’s book on Grandparents Talk also went in my shopping bag. It  was good to meet a poet who has writtn some of my favourite poems in the Treasury!

Finally a dose of laughter. Urzila Carlson used her new book, Rolling with the Punchlines, to deliver a stand-up routine/reading/musing/confession that was pure gold. Like most of us she was anxious about following on from people so much wittier or funnier or more erudite. She says it best. She had been hearing all this writing that was ‘like warm honey in your mouth and too good to swallow.’ She then compared it to an effervescent something on the tongue [and then a riff on that]. ‘Holy shit,’ she says ‘What am I doing here? I should leave. I should say I’ve got to get a flight with Ashleigh.’  But then she had us in fits of laughter, tears streaming for twenty minutes, with a few piercing moments of inbreath and gasp at something sad or hard to talk about. Such a tonic. 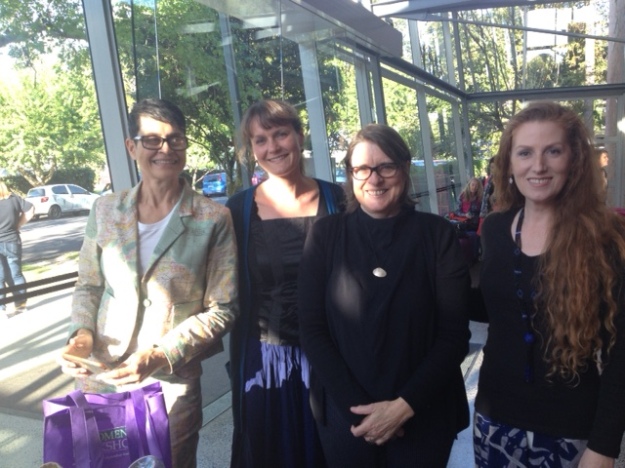 Thanks Carole and the Women’s Bookshop – it was a very happy audience.