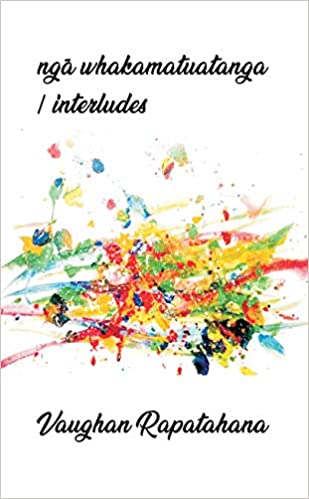 Vaughan Rapatahana, Te Ātiawa, commutes between Aotearoa, Hong Kong SAR and the Philippines. He writes in multiple genres (chiefly poetry, criticism and commentaries) in both his main languages, te reo Māori and English. He graduated with a PhD (on Colin Wilson) from the University of Auckland, and has published several poetry collections both here and overseas. Atonement was nominated for a Philippines National Book Award in 2016 and he won the Proverse Poetry Prize the same year. He edited Ngā Kupu Waikato: an anthology of Waikato poetry (2019).

Vaughan is a terrific champion of poetry in Aotearoa – he shines a light on poets that deserve far more attention than they currently get, particularly in his articles posted at Jacket2. He has also edited multicultural books of poetry with poetry exercises for secondary schools (Poetry in Multicultural Oceania – Book 1, Book 2 and Book 3, and the most recent teaching resource Exploring Multicultural Poetry 2020). He is a much admired poet in his own right.

Vaughan’s latest collection ngā whakamatuatanga / interludes appeared in 2019. It is a sequence of six parts that go deep into human experience, draw upon multiple languages and exhilarating linguistic effects. You will move with the sky, rain, trees, from home to home, from the Christchurch attacks to collecting driftwood, to a Waitangi dawn. I am hard pressed to find a local poet as linguistically agile and testing, perhaps Michele Leggott, although in a very different way. The aural intricacy, with its infusion of te reo and English, is like entering poetry cascades, poetic thickets, where you start with sound and are then delivered to radiant cores of experience, anxiety, ideas, feelings, observations, memory.

In ‘alien poet’ the speaker admits:

The poet is linguistically on the move. Lines are kinetic: words fade, elongate, go bold, change font or size, jam against a wall of white space, cram together, relish the the pause, the silent beat, the jumpcut. The movement affects the ear and the eye, and it feeds into the poet’s admission he is so far outside the spectrum as he writes in English. The movement also links to both heart and mind, because these poems, deeply knotted and deftly crafted, present fracture alongside connectivity, jarring alongside assonance.

Vaughan is writing with his tongue in multiple worlds – we are who we speak – we are how we speak – we are, we speak. At times, the lexicon is difficult, unfamiliar words gleam on the line. It reminds me that any language can appear brittle on the tongue, with meaning stonewalled, and with vital little keyholes. But also that poetry, as this collection shows, can adopt the honeyed fluency of conversation.

The collection begins with the section ‘ngā wāhi/places’, the ground to stand upon, to return to, to step off from. The first poem ‘Waitangi, 2017’ transports us to a particular occasion where we hear the karanga, the karakia, where noses press in hongi. The aural movement resonates. The words tough, soft consonants, hard consonants (‘that scurfy scrub’). The poem itself is the ‘cascade escalier’. I grew up in Northland, and have had many visits to Waitangi, and always find it is a place you feel. I feel Vaughan’s poem.

is a cascade escalier

we strive to scale

in our unkempt scansion.

The second section ‘ngā whanaungatanga/relationships’ is also an occasion to feel poetry. The poet moves in close to a violent father who drank, the love of his Filipino wife, grief at the death of his son, his daughter distanced in Australia. He is tracking the cycle of birth and death, and the bridges of living. The poems exude heat, strong feelings, vulnerability, pain grief love. At a time when our world feels so wobbly and uncertain, scary even, it matters to be able to read these poems, to feel these poems, where the poet is exposing his relations, wobbly and steady, with those closest to him. Intimate. Exposed.

that is your heart,

What I love about this book is that it is demanding and prickly, yet utterly welcoming to me as reader, in fact to me as human being. A kaleidoscopic glorious trajectory of life and living that is scrutinised. What does it mean to be a father, an Asian father? To call several places home? To live in Aotearoa ‘with our increasingly multi-cultural crew’? He asks whether it is ‘time for a new name, stressing our interconnections?’  His relationship with issues that matter are never monotone but strike sharp and sweet, political and personal. The poem ‘Aotearoa New Zealand’ is like a blessing, ‘we are birds singing several different waiata‘. It searches for conjunctions, connections.

Another poem, near the end of the book, in the section ‘ngā toikupu/poetry’, strikes a more strident note. This is a section where the poet grapples with what it is to write poetry (‘sometimes / writing a poem / is like / driving /  a / bus / under  / water’ – the words fall, stretch, flick back on page). It is writing on the edge, on the outside, face to face with ignorance. It is resisting form, going for the barbs, going for the honey, refusing the tropes.

(on the occasion of reading for p.e.n)

I don’t want to hear any more prattling lyrics about

kinfolk are being massacred in christchurch.

I don’t want to read any more verbose verse

rambling forever on about a lost love or three.

kiribati is sinking steadily into the sea.

I don’t want to see any more pale-pampered poets

kids continue to live in cars in winter

I do want us all to rage fulsome

to highlight the brave ones,

such as Wang Quanzhang

struck and stuck in RSDL

for the past few years,

& even then as a wan wafer

of his earlier self.

on Manus, six years plus

[poetry is the voice, the force

to speak the truth about our world

The roots of Vaughan’s poems feed on the then, the now, and the what will be. It is a collection to spend time with, to listen to, to look up words in the dictionary, to muse on your own burning experiences, to absorb the weather that smashes, and the wind that calms. You can’t package this book in a neat and tidy review, you can’t leave yourself out of the reading, it feels like a reckoning, it is a book that glows with humanity and, at the moment, that matters more than anything. One person’s poetry, one person’s experience, one person’s views, have the ability to touch so very deeply.

Vaughan on  Poems from the Edge of Extinction