The cat is curled on the poet’s lap. It’s very happy there. It licks its paw and rubs its ear with it. Scrinches up its eyes. He’s talking poetry again, the poet. He’s testing some of the lines he’s written. Tasting them, listening to the music. ‘For many years I lived in Southland. / In fact I am from Southland. / Some people say my speech is slow. / I say it’s deliberate, just.’   ( from the poem, ‘Plainsong’. )  ‘My lawn’s a rocket, / a multinational bearded lip bound by corsets. / It wrote the Bible and Mickey mouse / but being modest always blushes green.’    ( from the poem, ‘Sixties relic surveys his lawn’.) The cat’s name is on the cover of the book. It’s the title. Mister Hamilton. Yet there’s no reference to the cat inside the book. Nor is its name mentioned again within the pages.  People ask the poet, ‘Why is your book called “Mister Hamilton?”‘ And he replies ‘It’s the name of my cat. And I love my cat.’

When the poet dies, hundreds and hundreds of books are found in his house, in bookshelves, in cupboards, under the bed, in boxes in the garage. Dante is there and Yannis Ritsos, Francis Ponge, Pablo Neruda, Frank O’Hara. Along with R.A.K. Mason, Bill Manhire, Cilla McQueen and Peter Olds. His friends miss the sound of his voice. They remember ‘the ‘slow’ reflections  – ‘the kind that imply the presence of a companion, and a habit of conversation.’ (quote: Ian Wedde) The way he made poetry ‘ visible and desirable in his very being.’ (quote: Bernadette Hall. ) The cat remembers the comfort of the poet’s lap, the sound of his voice. The playfulness of all those pages turning. Finally the poet’s books are dispersed among those who will love them. Some, water-stained and mouldy, have had to be destroyed. The bulk of them, however, are out there, doing work that’s timeless and important, refreshing the way we talk to each other.

Mister Hamilton by John Dickson (1944 – 2017). Published by Auckland University Press, 2016. All quotations are taken from this book. 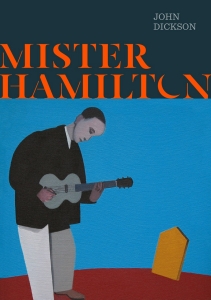 Bernadette Hall is an award-winning writer who has published ten poetry collections and edited several poetry anthologies (including for Joanna Margaret Paul and Lorna Staveley Anker). Her latest book, Maukatere, Floating mountain, with artwork by Rachel O’Neill, was published by Seraph Press in 2016. In 2015 she was awarded the Prime Minister’s Award for Poetry, and in 2017 she was invested as a Member of the New Zealand Order of Merit for services to literature. She lives in Hurunui, Canterbury. 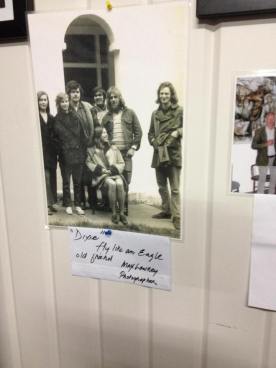 At times last night’s memorial poetry reading for John Dickson felt like friends gathered in a room together, having a quiet drink and reminiscing about their friend Dixie.
Fitting somehow that it was held in the Crown Hotel. Is it because the beloved Crown is such a Dunedin venue – non-pretentious, down-home, verging on grungy, established, under-stated, historical, storied – as if all the people who have frequented, hosted, performed, chatted and imbibed there have left behind some invisible imprint of themselves?
At other times the night took on the air of a formal poetry reading befitting and honouring a much-revered poet. 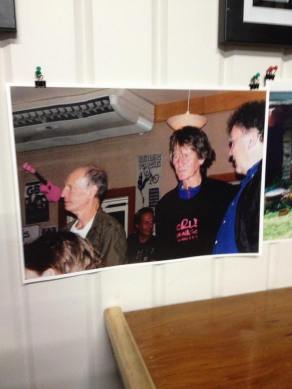 Jenny Powell read John’s famous Miles Davis poem; her delivery a tour de force and much appreciated by John Dickson aficionados present.
I read some of my own poems – poems about Dunedin and its streets and poets; poems which I hoped would reflect in some small way a poet I admired.

David Eggleton read two of his own poems, introducing his reading by saying he first met John thirty years ago and remembers, among other things, his gift as an entertaining raconteur of circular stories.
Richard spoke about how he got to know John in 1996 when he was a student and recalls their complex discussions about poetry, admitting that probably neither understood what the other was talking about. He also mentioned the value he placed on John and

Jenny’s friendship, and their visits to his Warrington home (which John dubbed as ‘bucolic’).
Richard also mentioned that in the 1980’s, John and Cilla McQueen ran poetry readings in Dunedin, which were attended by poets such as Hone Tuwhare and Bill Manhire.
John’s gift of friendship was mentioned many times – so much so that it became a feature of the night.

Max Lowery spoke about his friendship with John over many years and his regard for him both as a person (a friend, a flat-mate) and a poet. Towards the end of the evening, a quiet and reflective mood filled the room as Max talked about the photos of John that he had put up on the wall, and shared the memories that they evoked.

Alastair Reid also spoke of his close friendship with John, allowing someone like me, who didn’t know John well, insight into his individual take on life, his love of life, his curiosity about life and his love of learning, right to the end.

Alastair Galbraith also spoke about John’s dry humour, his laconic, unpretentious way of always just being himself. In particular, he spoke about John’s reading of his poetry. How amazingly deliberate and almost mesmerising it was. He recalled memories of recording

John reading his poetry and had the cds available for anyone wanting to buy them.
Richard read an excerpt from a twenty-eight page (yes, that’s right; twenty-eight page!) poem John had sent him as a response to a (much shorter) email Richard had sent him when the Irish poet Seamus Heaney died, thus treating those of us there to part of this poem’s dazzling, sweeping trains of thought.

Over and over, John Dickson’s warmth, regard, his gift of inclusion, of friendship, his intelligence and extraordinary complexity and depth as a poet, came through what people said and read.

Dixie will be greatly missed. 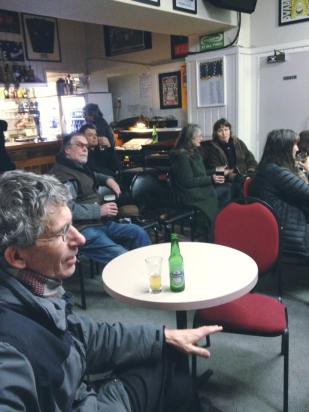