Have you heard of Artemisia?

Have you heard of Artemisia of Halicarnassus,

Have you heard of Hiera of Mysia? Or Julia

Mammaea who ruled Rome? Or Tomyris the Celtic

queen who killed great Cyrus of the invading

Have you heard of Boadicea who fought

an attacking empire – who would not be a Roman

Triumph and died by her own hand?

Have you heard of Martia Proba, Martia the Just?

Her Martian Statue after a thousand years

And what of Hypatia of Alexandria? head of

the School of Philosophy, logician, astronomer,

mathematician, torn to pieces by a Christian

Have you heard of Thecla the Apostle, or Aspasia,

or Nausicaa? and if you know passionate Sappho

what of Corinna, St. Bridget, or the Lady Uallach?

and since you know Joan of Arc, should I

or Philippa the beloved queen whose merchants

bought her pawned crown back . . .

I did not learn them at school, these queens

and scholars . . . but scan names such as Mary,

Elizabeth, Shulamith, for their story – vivid

women who lived as the Celts did, with audacia,

In a wheel’s radiation all spokes fit the motion . . .

and I have heard it, who am a descendant

in a train, going back to a flat with a goddess

Heather McPherson, from A Figurehead: A Face (Spiral, 1982)

Have you heard of Heather McPherson?

Emma Neale asked me this question when I was searching for lesbian and queer poets for my PhD research. I hadn’t which is hard to imagine now.

‘Have you heard of Artemisia?’ was painted on the outside wall of the Women’s Gallery on Harris Street, Wellington in 1981.

As I typed the poem it became apparent that Microsoft Word had not heard of Cartismandua, or Hiera of Mysia or Tomyris. Neither had I. My middle name is Bridget. A name I share with many women in my family. Every year in my Catholic primary school in Ireland we weaved St. Bridget (most commonly spelt Brigid) crosses on her saint’s day, the first of February. Nobody mentioned Darlughdach, Bridget’s apparent female lover and soulmate. Catholic forums online call this a conspiracy theory.

Heather was the first out lesbian to publish a poetry collection in New Zealand.

I’m not a “gold star lesbian” (watch Hinemoana Baker explain the term here). It took me a long time to own my feminism. The Guerilla Girls came to my university in Cork sometime in 2007 (or 2008 or 2009 . . . ) and when they asked the crowd, “How many people here tonight call themselves a feminist?”, I did not raise my hand. I didn’t think then that it mattered that men always won the Oscar for best director, or that women feature in the Met predominately as nudes not as artists. I believe my religious upbringing ensured that the patriarchal domination of society remained unquestioned within me for far too long. I did not learn to question at school.

There are ten question marks in this poem. I encourage you to ask yourself ten questions today. And to ask ten people, “Have you heard of Heather McPherson?”

Emer Lyons is an Irish writer who has had poetry and fiction published in journals such as Turbine, London Grip, The New Zealand Poetry Society Anthology, Southword, The Spinoff and Queen Mob’s Tea House. She has appeared on shortlists for the Fish Poetry Competition, the Bridport Poetry Prize, the takahé short story competition, The Collinson’s short story prize and her chapbook Throwing Shapes was long-listed for the Munster Literature Fool For Poetry competition in 2017. Last year she was the recipient of the inaugural University of Otago City of Literature scholarship and is a creative/critical PhD candidate in contemporary queer poetry.

Heather McPherson (1942–2017) was a poet, editor, teacher and feminist activist. In 1974 she founded Christchurch Women Artists Group and Spiral, a woman’s art and literary journal. She published five collections of poetry, with her poems appearing in numerous journals and anthologies. Figurehead: A Face (Spiral, 1982) was the first poetry collection by an out lesbian in New Zealand. Janet Charman selected the poems for McPherson’s posthumous collection, This Joyous, Chaotic Place: Garden Poems (Spiral, 2018).

I was really delighted to read Aorewa’s memories of Heather and her poetry.

I loved Erena’s letter with its poem inserts.

Reading Murray’s editorial on The University of Auckland decisions to shrink The Arts along with sites of book culture and knowledge is essential reading. Heartbreaking to read as a graduate. What can we do? 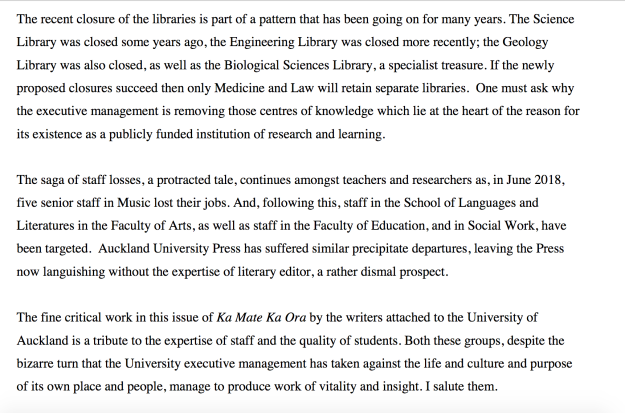 Now back to the rest of the issue!

Heather McPherson (1942 – 2017) published 4 poetry collections in her lifetime, with her first, A Figurehead: A Face, paving the way for future poets. It was the first poetry book by an out lesbian in Aotearoa/ New Zealand.  In 1974 she founded both the Christchurch Women Artists group and Spiral, a women’s literary and arts journal.

Before her death, Heather asked poet Janet Charman to edit her garden poems while Lynne Ciochetto and Marian Evans formed a Spiral collective to publish the volume.

When I think of garden poems, I think of Ursula Bethell and the decade she devoted to writing and gardening when she lived with her beloved companion, Effie Pollen. I have thought about these intensities a lot, and write about them in my forthcoming book.

To enter the glades of Heather’s final collection, lovingly tended by Janet, is to enter a garden rich in aroma, with diverse plantings and seasonal changes. As with Ursula, to view Heather’s writing through a garden lens is extremely productive.

where we buried my mum and dad. Oldish,

from ‘At Rangiora’s Ashley Street Cemetery’

We begin at Ursula’s grave, and while the poem draws us in close, it also generates little waves that connect admired poet – mentor almost – to Heather’s parents: one grave seeking pilgrimage as much as the next. And herein lies the delight of the poetry, the way the visual piquancy (‘the bird droppings// and twigs’) interweaves with the many selves: daughter, poet, companion, political attendee.

Attendance is vital because this is a poet who paid attention to things, small and large, the one nestled in the other, crafted within the reflective surface of poems. At times it is the joy of the thing itself that matters:

but this shape-shifter tree blossoms

On other occasions the poem is a vehicle for story or anecdote, and a way of tending vital bonds, personal experience, inner movement. Age is a preoccupation as is the necessity of companionship.

Goes slack and perishes. Soon as I touched it, it gave way.

Dangerous. Gone holey. I’ll get you a tow.

from ‘Waiting for the breakdown truck’

I spend time in Heather’s poetic glades, because the senses are on alert, the description compounding, and it imbues my own contemplative state. I like that. I like the way my mind wanders through my open window to the kereru plundering the cabbage tree, and then I am back within an intensity of poppies:

In a poem for Fran, Heather responds to her friend’s paintings, and it seems to me, the astute observation might also be applied to the poems.

But I don’t have lots of things in

ah, I said, but your painting traps

amazing movement in it – it moves,

it moves – whether or not your

subject does  – it moves internally

As much as stillness gifts Heather’s poetry a translucent layering, the internal movement – the links and arcs, the revelations, the richnesses and the reserve – offer an uplift along with countless movements. By paying attention to the garden in which she lived, and the people close to her, her poetry establishes contrasting intensities – from the joyful to the chaotic. It is a pleasure to read.

‘This Joyous, Chaotic Place: He Waiata Tangi-ā-Tahu’ is a multi-media project to celebrate poet and lesbian activist Heather McPherson (1942-2017) and her peers in the Aotearoa New Zealand’s women’s art and literature movement of the 1970s and 1980s. It is a #suffrage125 project, funded by Creative New Zealand and includes an exhibition, a collection of Heather’s ‘garden poems’ and a shopfront cinema showing 70s and 80s short films and raw footage.