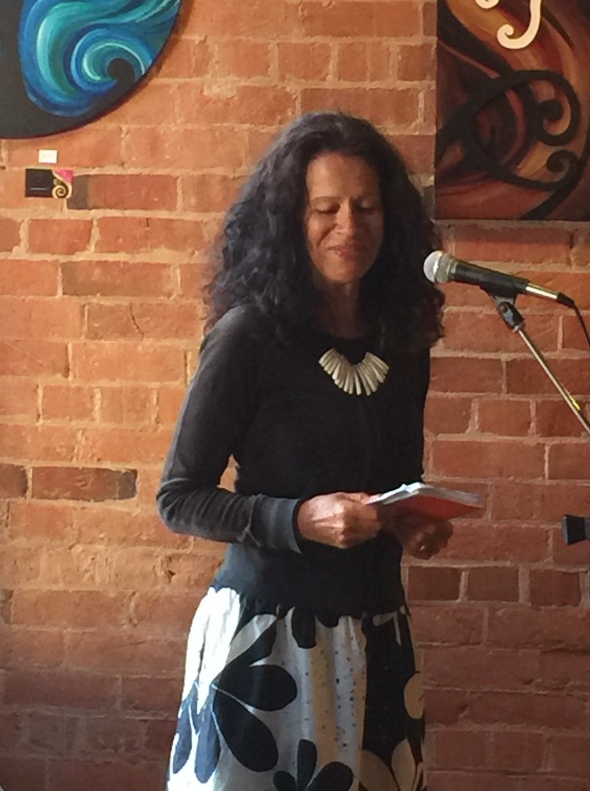 Reihana Robinson reading from Of Her Limitless Her (Mākaro Press, 2018),  in Gisborne

Reihana Robinson (pehea Ngati wai, he whangai) is a writer and artist and organic farmer living for most of the year in a remote part of the Coromandel and involved with environmental research, in particular New Zealand’s controversial use of aerial poisoning of wild animals.

My writing has been published in the USA, Australia, and New Zealand in a number of journals, including Cha:An Asian Literary Journal, Landfall, Cutthroat, Hawai’i Review, Trout, Melusine, Takahe, Cezanne’s Carrot, subTerrain, Cordite Review, Overland and Blackmail Press. My poems have appeared as part of AUP New Poets 3, Auckland University Press, 2008; and my first volume, Aue Rona, was published by Steele Roberts, Wellington, NZ, 2012. My second collection Her Limitless Her, was published in 2018 as part of Hoopla, Makaro Press

I have held artist residencies at the East West Center, Honolulu, Hawai’i, and the Anderson Center, Red Wing, Minnesota. Artwork is held in collections in Europe, USA, and the Pacific. I was the inaugural recipient of the Te Atairangikaahu Award for Poetry.

WHY I CHOSE AFTER THE FALL

I chose After the Fall, a poem from 2014, as it fits with my present state of mind that whirls up and down and around the screaming injustices pulsing the planet in the form of never-ending wars.

Keiji Nakazawa wrote Barefoot Gen about the hibakusha, the “survivors of the atomic war” to remind us of the work it takes to create peace. I haven’t talked about the poem as a poem, however the reviewer Reid Mitchell does in Cha an Asian Literary Journal  https://finecha.wordpress.com/2014/05/08/after-the-fall/

In the graphic novel on which this poem is based the child has a name. It is this naming that brings some kind of hope in the face of deep atrocity. It is why I end the poem with the child’s name. As Brecht wrote when the atrocities come like falling rain/ no one calls out ‘stop’

As a teenager I imbibed as if fed, Joan Baez singing There but for fortune and so it goes. Writing poems to lift the siege, to smear the graffiti, asking friend and stranger to love more and to cry out in the dark— i te ao marama.

‘After the Fall’ published in Cha: An Asian Literary Journal