Helen Heath’s debut collection, Graft, won the NZSA Jessie Mackay Best First Book for Poetry Award. It was also shortlisted for the Royal Society of New Zealand Science Book Prize (the first poetry or fiction shortlisted). Helen has a PhD in Creative Writing from Victoria University of Wellington’s IIML. Her new collection, Are Friends Electric, is a poetic smorgasbord that offers diverse and satisfying engagements. To celebrate the new book, Helen and I embarked on an unfolding email conversation. 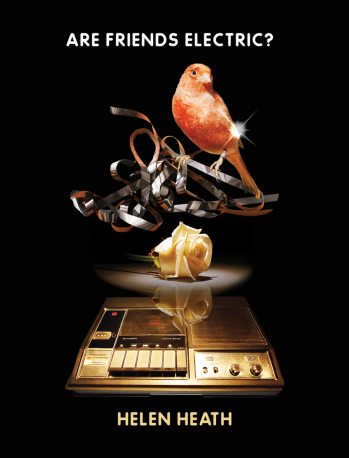 The large electric that is you

the mouth and the associated

kiss. The source is kind, simply

to view a scratched course.

from ‘Greg and the bird’

Paula:  The first poem, ‘Reproach’, starts with the word ‘you’. It is like an open invitation to enter the book. The next word jump cuts to ‘poet’ and from there to a reading hunger:

You. Poet. You’re hungry to be read

It is the best opening, the most audacious opening, to a book I have read in ages. Then as the poem curves and folds you end up at the footnote and the origins of the poem’s found text. I am reminded of the unreliability of language to represent reality. Tell me about the challenges you lay in the opening line and your experiences with Plato’s Phaedrus.

Helen: Thank you, I’m so glad you think so. The opening line is a response to the feeling of despondency I sometimes get when writing: ‘What’s the point?! Who even reads this?! This will all get lost and forgotten in time!!’ There is a famous passage in Plato’s dialogue Phaedrus where Plato recounts Socrates rejecting the invention of writing, believing it will strip our ability to remember and thereby an essential part of our humanity. Of course, the irony is that we know this because Plato wrote it down. Writing was an early technology and a similar argument is often put forward against various kinds of modern technology, such as smartphones or the internet, claiming they harm the development of memory or social skills.

Nicholas Carr wrote a now famous article in The Atlantic in 2008: ‘Is Google Making Us Stupid? What the Internet is doing to our brains’, which he developed into his book The Shallows. Giovanni Tiso wrote a thoughtful response to it on his blog. Technology can’t be separated from culture, it’s a cultural artifact, like language. “We shape our tools and, thereafter, our tools shape us.” — John Culkin (1967). This all circles back to the anxieties of the opening line and, as you rightly point out, the unreliability of language to represent reality. The poem attempts to wrap up anxieties surrounding the fallibility of language and writing with central themes of the collection.

Paula: Fascinating. The act of writing is itself a way of remembering and negotiating what is hard, elusive, necessary, puzzling. The list could go on! There are a number of found poems in the collection that stage you as first reader then writer. What attracts you to them?

Helen: It became impossible to separate the research from the writing in this collection. This book can almost be seen as a journal of reading and cultural responses. I was writing my way through some big ideas, trying to come to some kind of personal understanding. ‘Thought in motion’ is a phrase that comes to mind.

The other aspect of the found poems is the concept of literary and cultural intertextuality and how that can be seen as an analogue translation of hypertext and the internet as form. I am interested in poems that weave connected and reoccurring themes and ideas through their collections. In this book the poems reference other texts, popular culture, and each other, and (I hope) build up the reader’s understanding of the collection’s thesis incrementally.

I am a woman and

this is a bridge,

despite our vast differences

we are very much in love.

One of the most difficult

parts of being in love

with a public object

is that he and I can never

from ‘The objects of her desire’

Movement can be such a strength in a poem. A poem as ideas in motion is in such contrast to personal poetry. Yet what I love in your poems is the shifting voice, the conversational tones. Do the found poems also stage forms of ventriloquism?

Helen:  Yes, definitely. I went to a Masterclass with Kei Miller when he visited Wellington in 2014, many of his poems are based on research and I asked him what techniques he used to keep his poetry from getting bogged down in facts and getting stale. He said he tries to focus on voice in his work. I started experimenting with persona poems and found this shape-shifting quite addictive.

I see myself working in a feminist tradition ­­­– the use of persona and alternative memories plays an important role in feminist revisionist mythology. In addition, a modern, post-positivist, scientific approach acknowledges the difficulty, if not the impossibility, of removing the personal from narratives of knowledge; it acknowledges the importance of multiple voices and experiences. I wanted to reflect that in my work.

(..) The city is constantly

under construction, so many empty spaces,

so many car parks, you can get lost

in your home town without familiar landmarks.

but they jiggle on my hand-held screen.

I also see a common thread of seeing, strolling, collecting, as though this is poet as bricoleur, as though the book is a cabinet of curious things? How does that resonate with you?

Helen:  Yes, I think that is a good description, especially of the first half of the collection. Although, I hope this ‘cabinet of curiosities’ builds into a narrative for the whole book.

You say, ‘No I’m beyond bodies now,

I’m ready to be fluid, spilling out all over.

I’m ready to spread myself so thin that I’m

a membrane over the world.’ I’m not ready.

I take off my socks and shoes and walk

over a patch of grass very slowly.

from ‘Spilling out all over’

You move into poems that link grief with the effect of technology upon our bodies. Again there is a carousel of voices that may or may not be invented or borrowed but they make you feel something. What was driving you as you wrote these poems?

Helen:  My brother-in-law was dying of cancer while I wrote the collection and that had a profound impact on my work. I was watching my sister and her children go through this devastating loss while I was researching new technologies. The voices aren’t their voices directly, they are invented, but they are deeply influenced by this experience.

Paula: That’s interesting. The way writing can absorb things so it is there hiding in the ink. Were you bringing yourself in close as you wrote or keeping at a little more distance?

Helen:  The first half of the collection is probably more curious and observational. The second half, while still observed (yet invented) is definitely more personal to me. The collection attempts to zoom in from observer to participant as you read through it.

Paula:  Yes I got that shift. And in a way the second half reflects and refracts back on the first. Did you need a particular place to write the poems?

Helen: I guess it was a particular headspace rather than a physical space. I was deeply immersed in the research and the writing, it was all consuming. Physically, I wrote wherever I could: at home, at varsity, on retreat, on the train, in bed…

Paula: The book is so complex, and satisfies so many layers for the reader, what did it do for you as writer?

Helen: Haha, it completely did my head in!

Paula: Were there any poetry books you read as you were writing this that tilted things for you? Or simply filled you were awe or admiration?

Helen: I was reading everything I could of Jo Shapcott, Jorie Graham and Deryn Rees-Jones. Jo Shapcott doesn’t write about technology but she is what I would describe as a science poet who creates poems as thought experiments and deeply considers embodiment. I stumbled across Fleur Adcock’s 1971 speculative poem ‘Gas’ for the first time while writing this book, I found it disturbing and exciting. Similarly I was thrilled by Welsh poet Deryn Rees-Jones’ book length poem Quiver (2004) – a speculative murder mystery involving a clone – it’s fantastic.

Paula: Is there a poem that particularly works for you?

Helen:  I’m going to cheat and name three for different reasons. The poem that is the most personal is ‘A rise of starlings’, which is for my sister. I feel my heart crack open when I read it. ‘The Anthropocene’ is a poem, or lyric essay, which I think works because of the way it circles around a subject, attempting and failing to nail it neatly. Finally, I kind of love ‘Greg and the bird’ because it is the whole book scrambled then distilled into one poem that is meaningful and meaningless at the same time.

Paula: Yes, and all three are quite different.  Perhaps the connective tissue is what I might call a humane fluency.  ‘A rise of starlings’, for example, is mesmerising – both still yet full of movement. It is a poem that catches in your throat as you read.

in our own night sky. You

across the darkness, through

messages to me in particles

of dust and light.

from ‘A rise of starlings’

This was such a pleasure Helen, talking poetry, thank you.

6 thoughts on “Poetry Shelf in conversation with Helen Heath”