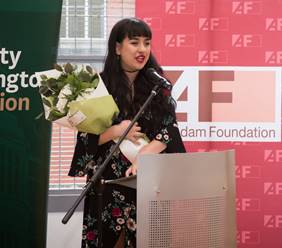 A “powerful, restrained but unafraid” collection of poems that explore the lives of four generations of Māori women has been awarded the 2017 Adam Foundation Prize in Creative Writing by Victoria University of Wellington’s International Institute of Modern Letters (IIML).

Tayi Tibble, 22, wrote the winning work—In a Fish Tank Filled with Pink Light—as part of her 2017 Master of Arts (MA) at the IIML.

Tayi describes winning the Adam Foundation Prize as incredibly encouraging. “It was a privilege and a pleasure to have spent the year so deeply immersed in the world of writing with such talented, intelligent, and generous friends. I believe it was the high calibre of work from my peers that stimulated my growth as a writer, as well as the guidance and encouragement from Louise Wallace and Chris Price. Although I am sad to see the end of this invaluable year, winning the Adam Foundation Prize signals the beginning of a new chapter.”

Wellington-born Tayi (Te Whānau a Apanui/Ngāti Porou) went to school in Porirua and holds a Bachelor of Arts in History and Social Policy from Victoria. She has regularly appeared in Wellington’s LitCrawl Festival, and her work has been published in Starling—the journal for writers under 25—and Landfall.

Supported by Wellingtonians Denis and Verna Adam through the Victoria University Foundation, the $3,000 Adam Foundation Prize is awarded annually to an outstanding student in the MA in Creative Writing programme at the IIML.

Chris Price, a senior lecturer at the IIML and co-convenor of this year’s Master’s programme, says it’s been a pleasure to read the poems as they have developed over the course of the year.

“Tayi is an ambitious writer who has seized every opportunity to extend her craft and her range of subject matter. Her poems speak to contemporary urban realities, and to the histories that created them. They are also charming, funny and on point.”

This is the second year running that the Adam Foundation Prize has gone to a 22-year-old writer, after Annaleese Jochems’ novel Baby received the prize in 2016.

“Tayi joins the incoming wave of young writers who are forging the future of literature in this country. We are confident she will make her mark,” says Chris.