Welcome to the online book launch of Mikaela Nyman’s novel Sado (Victoria University Press). Settle back with a glass of wine before dinner and let’s raise our glasses!

Publisher Fergus Barrowman welcomes us and the book:

Mikaela Nyman introduces us to Sado with a reading:

This launch was to be held in person with wine and food at Vic Books, Kelburn. We are sorry we don’t get to celebrate the launch of the book by supporting Vic Books and we ask that when business resumes, readers support them.

Here’s a link to our webpage – where people can buy the reader through Mebooks for kindle or any other ereader. People can also read the first chapter of Sado on PDF from a link on that page too. 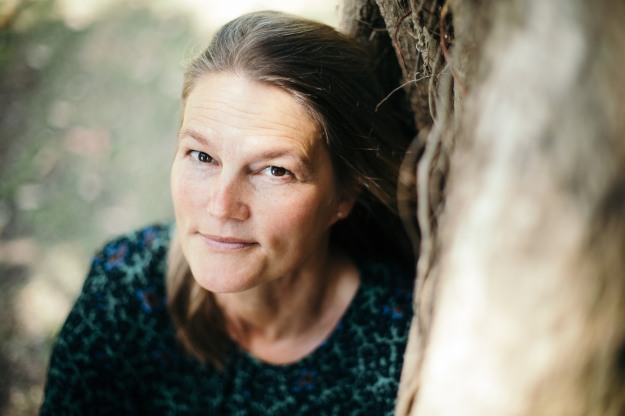 Your debut novel, Sado, is set in Port Vila, Vanuatu, just after Cyclone Pam caused massive destruction in the islands. Can you tell us about the genesis for your story?

It grew out of the realisation that Vanuatu didn’t seem to feature on people’s radar in New Zealand – despite the fact that it is only a three-hour direct flight away, and we have thousands of Ni-Vanuatu come every year to work in our vineyards and orchards. The majority of New Zealanders I encountered who had visited Vanuatu, had only been there for a day, on a cruise ship holiday. They ‘had done Vanuatu,’ or so they kept telling me. The absoluteness of this statement threw me. I was privileged to spend four years in Vanuatu and feel I’ve barely dipped below the surface – thanks to the generosity of friends, colleagues, villagers, public officials and artists who have shared the richness of their respective cultures, experiences and languages with me over time. Vanuatu stretches over 80 islands and has more than 100 languages. There’s a lot more to it than Port Vila. Yet the exotic island holiday paradise narrative prevails.

Across the Pacific, entire populations brace themselves every year for the cyclone season. But for Vanuatu it wasn’t until Cyclone Pam radically transformed the landscape in 2015 that the outside world took notice. And even then it only lasted for a moment, until a greater natural disaster in another part of the world superseded Pam. And in a heartbeat the world’s attention on a suffering small Pacific island nation was gone. It could make you cynical. Or you could start writing about it … I guess as an islander (albeit from the Northern hemisphere), and as someone who has always tried to make sense of the world by writing about it, I wanted to share a more nuanced and complex reality that included the everyday desires, tragedies, joys, limitations and absurdities that tend to make up island life.

You have two main protagonists, Cathryn, a New Zealand national working in Port Vila, and Faia, a Ni-Vanuatu woman, and colleague of Cathryn. Can you talk about the relationship between these two characters and how you went about the creation of these two very different people?

Cathryn and Faia are amalgams of many people I’ve encountered. There are aspects of their personalities that are made up, because the story demanded it. They are both devoted mothers and have worked together for several years in a fictional non-governmental organisation, yet Cathryn remains more reliant on Faia than vice versa.

Faia is part of a larger and more complicated local scene, with more obligations and reciprocal relationships than Cathryn will ever have. Their relationship traverses that awkward territory where they are no longer merely work colleagues, but neither are they very close friends. I wanted to explore that tension – how far you can push friendship, what may break it; what you are able to forgive, and how.

From a young age, I was hooked on Toni Morrison’s novels. Decades later, I found her insightful lectures, published as Playing in the dark: whiteness and the literary imagination, where Toni Morrison speaks about the perils of writing ‘blackness’ (specifically African-American), and equally the perils of not writing about it enough, and thereby contributing to erasing part of the world’s population from historical records and literature. I did not wish to contribute to that erasure. And I did not want a single narrative that in its incompleteness reinforces stereotype, to paraphrase Chimamanda Ngozi Adichie.

I explored ways to include other voices and came across a helpful essay on Toni Morrison’s paired characters in her novels. It discusses how time and again Morrison’s perceived protagonist serves as an ironic anti-hero, while a secondary character, with a seemingly lesser role, demonstrates courage and overcomes immense personal and cultural obstacles. The ‘seemingly lesser role’ and the common assumption that there is only one protagonist, usually the one who takes up most space, resonated with me as an apt description of what I was trying to achieve. It confirmed to me that Cathryn, albeit the perceived protagonist, could indeed be the anti-hero. What I needed was a radical and tangible shift to physically wrestle authority from Cathryn and pass it to Faia.

There is a lot of discussion presently around the ethics of what stories a writer can write – can you talk about what it was like for you to write Sado? What considerations played into your writing and research of writing a novel set in Vanuatu?

I don’t think I would ever have written a story set in Vanuatu without actually having lived there. The experience of being hammered by Cyclone Pam, a devastating Category 5+ super cyclone, is part of my own lived experience, it is my story to tell (although I hasten to add that my personal circumstances were not the same as Cathryn’s). Apart from the cyclone, there was a lot to consider. Vanuatu was never going to be reduced to mere setting, for a start.

The discovery that Vanuatu doesn’t really feature in New Zealander’s imagination was followed by a realisation that Ni-Vanuatu women’s voices and creative expressions are underrepresented, particularly in literature. I was fortunate to have Teresia Teaiwa read some of my early draft chapters and give me positive feedback before she unexpectedly passed away. It gave me the confidence to continue on this track. ‘We are tired of having to constantly explain ourselves to the outside world,’ Teresia said several times, talking about the Pasifika community in New Zealand, and more broadly about the experience of women of colour in various parts of the world. She handed me a copy of ‘Identity, Skin, Blood, Heart’ by Minnie Bruce Pratt, and Lisa King’s writing on rhetorical sovereignty and rhetorical alliance in the writing classroom.

And so I chose to become an ally and supporter, and perhaps a conduit for New Zealanders to glean a different perspective of their Pacific neighbour. To help explain what it feels like to be at the receiving end of such a natural disaster in our Pacific neighbourhood and to have to deal with an unprecedented influx of responders and well-intended, but perhaps misplaced, relief efforts.

In parallel, I’ve shared my writing, my knowledge and skills with emerging Ni-Vanuatu women writers, facilitating creative writing workshops and collaborative poetry events, in order to find my place in the world and enable Ni-Vanuatu writers to grow as writers and see their work published. ‘Nothing about us without us,’ one of my Māori colleagues said to me when we discussed the ethos informing my research and novel writing. It reinforced my decision that working in alliance and collaboration would be the best ethical choice. Taking heart from the fact that these Ni-Vanuatu women writers were among my first readers and encouraged me to keep writing this world that they recognised, while at the same time ensuring I left space for Ni-Vanuatu writers to tell their own stories. The kind of insider stories I couldn’t possibly tell.

You are also a published poet in your native language. How does your writing in different tongues as well as in different modes – poetry and prose – influence how you write?

I was told my alternative novel titles were too poetic, for a start! Writing in my own mother tongue was a project of writing myself out of personal grief and back to my own language universe. Through language I can belong to different worlds. I actually dream in different languages. I thought I had lost my Swedish and Finnish vocabulary, that they’d been erased by English. It doesn’t seem to be the case, although I know I haven’t been able to keep up with the slang and ever evolving obscene language.

I’ve found it’s more difficult to translate my own poetry than my prose. Language evolves according to its own logic and grammatical rules, complete with specific metaphors and implied subtexts. When I write I have to stay focused on the language I’m using in that moment to make it full justice. It can be quite tiring and takes time, with lots of cross-checking if my family keeps interrupting. Some scenes in the novel started as poems, other bits were cut from the novel but morphed into poems. At the end of the day, poetry and fiction are just different languages in which to express what matters most to me.

Thank you for coming. Please refresh your glass, make a note of the book, and enjoy the rest of your evening.