This prestigious biennial poetry award from Landfall and the Kathleen Grattan Trust is for an original book-length collection of poems, by a New Zealand or Pacific permanent resident or citizen.

The result will be announced in Landfall 238 (November 2019), and the winner receives $10,000 and a year’s subscription to Landfall. Otago University Press has the right to publish the winning collection.

For full entry details, and to learn more about Kathleen Grattan and the history of the award, go to here

The judge for the 2019 award is Jenny Bornholdt, who has published ten books of poems, the most recent of which is Selected Poems (VUP, 2016). She also edited the 2018 anthology Short Poems of New Zealand (VUP).

Her collection The Rocky Shore was a made up of six long poems and won the Montana New Zealand Book Award for Poetry in 2009. She is the co-editor of My Heart Goes Swimming: New Zealand Love Poems and the Oxford Anthology of New Zealand Poetry in English. Jenny’s poems have appeared on ceramics, on a house, on paintings, in the foyer of a building and in letterpress books alongside drawings and photographs. She has also written two children’s books. 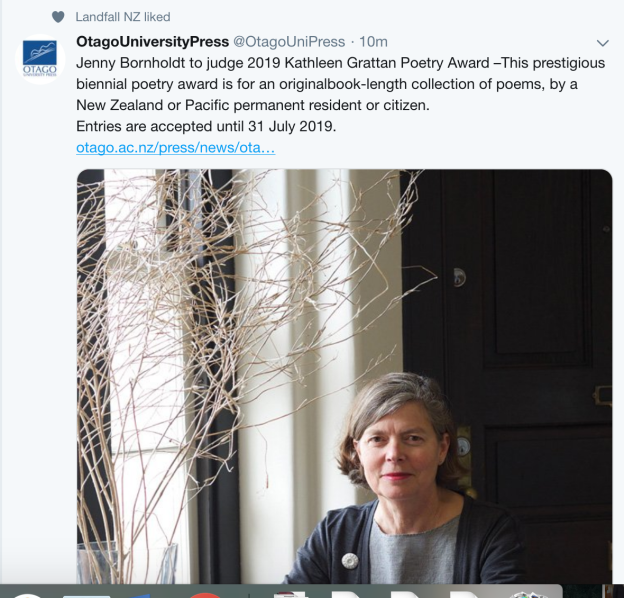