After lunch my mother walks into the dining room

and my father and I both

In the past when I thought about people my parents

not among them. But some wound stayed

wide in all of us, and now I see in their faces

strange rivers and waterfalls, tilted over with broom.

You are watching the brown-paper covers of books grow

out around your father, as he dreams there

against the wall, thinking perhaps

how rocks are not quite lands.

Kevin Ireland picked Gregory’s poem and had this to say: “Gregory Kan’s sequences in This Paper Boat are full of self-discoveries and surprises. The words really do swirl around and head off in different directions — just like the paper boats that inspired them.”
Group Two (go here for poems)

To mark the 20th anniversary of Phantom Billstickers National Poetry Day (NPD), 20 leading Kiwi poets were asked to select one of their own poems, something they felt spoke to New Zealanders now. They also chose a poem by an emerging poet, writers they feel make essential reading for us in 2017.

The result is the 20/20 Collection – 40 poems by New Zealand poets who represent the diversity and vibrancy of talent in our contemporary national literature. The list includes Poet Laureates, Ockham New Zealand Book Awards winners, and strong new voices from recent collections and anthologies.

NPD has been running continuously since 1997 and is always celebrated on the last Friday in August. Poetry enthusiasts from all over New Zealand organise a feast of events – from poetry slams to flash and pop-up events – in venues that include schools, libraries, bars, galleries, surf clubs, and parks. This year’s NPD will be held on Friday 25 August.

Paula Morris, NPD spokesperson for the New Zealand Book Awards Trust, said that she was “excited to see the range of voices selected here, and the ethnic and geographic diversity in the poets chosen by our twenty established writers. This list speaks to a ‘new’ New Zealand literature, and reflects how much our culture is changing and growing.”

Many of the poets featured in the 20/20 Collection will take part in events on 25 August, Phantom Billstickers National Poetry Day 2017. Event organisers are encouraged to register their poetry event online as soon as possible: http://www.nzbookawards.nz/national-poetry-day/how-to-register-your-event/.

Now into their second year of naming rights sponsorship of National Poetry Day, Phantom Billstickers will support NPD and 20/20 on the ground, online and in print, with funky billstickers that celebrate our nation’s poets. Business Development Manager Kelly Wilson says, “If given a platform, poetry speaks to people. We are very proud at Phantom to support National Poetry Day and provide platforms all around the country for the poetic voice of New Zealand.”

National Poetry Day was established in 1997 with a mandate to celebrate discovery, diversity, community and pushing boundaries. It is a one-day national poetry-event extravaganza held on the last Friday of August each year. This is the second year of National Poetry Day operating under the sponsorship of Phantom Billstickers.

Phantom Billstickers is a street poster company which has consistently helped New Zealanders express themselves since 1982. Recognising and supporting home-grown talent has always sat comfortably alongside its commercial campaign work. Phantom actively promotes New Zealand music, art, poetry and culture around the country and across the world, putting poetry on posters and a literary mix of work into cafes via its quarterly magazine Café Reader.

The 20/20 Collection features work by living New Zealand poets with one exception: Tusiata Avia’s selection of a poem by Teresia Teaiwa. Sadly, Teresia died of cancer in March, aged just 48. She was a much loved and influential

figure in Pacific studies, and ​the committee hopes that her inclusion in 20/20 encourages more people to seek out her important creative and critical work.

Paula Morris (Ngati Wai, Ngati Whatua) is an award-winning novelist, short story writer and essayist. A frequent book reviewer, interviewer and festival chair, Paula holds degrees from universities in New Zealand, the U.K. and the US, including a D.Phil from the University of York and an MFA from the Iowa Writers’ Workshop. She is convenor of the Master in Creative Writing programme at the University of Auckland in New Zealand. 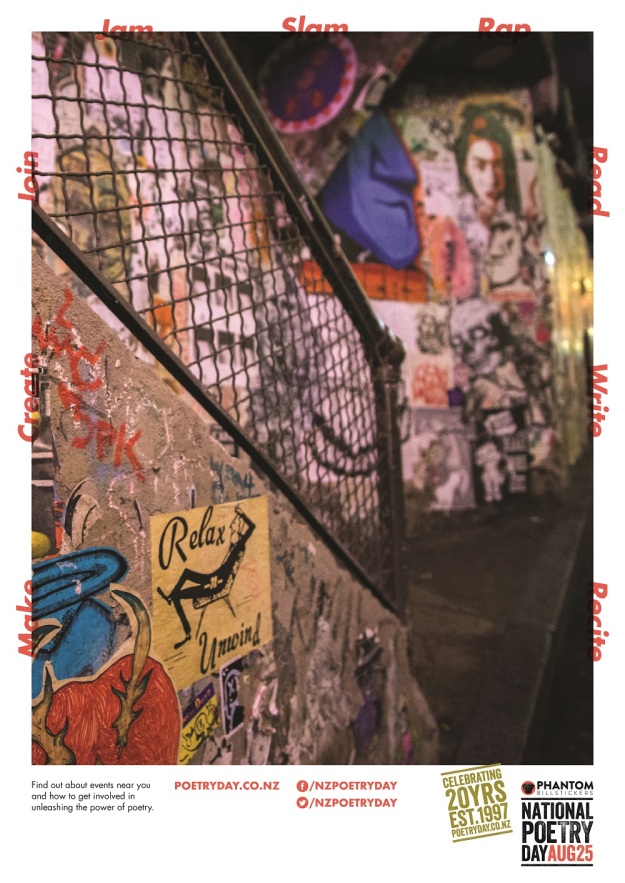