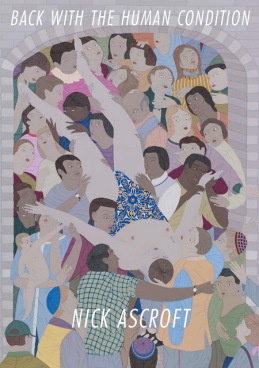 for the full review by Airini Beautrais go here

Junctures and Meaning: A review of Back With the Human Condition by Nick Ascroft

Nick Ascroft has garnered a reputation as a comic poet, and rightly so: anyone who’s seen him in performance can attest to the hilarity of his lines.

Back With the Human Condition, Ascroft’s third collection of poetry, is studded with highly entertaining and performable pieces. There’s ‘Juju,’ an ode to a fabulous haircut; ‘The Lord of Work,’ a list or litany poem with a punchline ending; ‘Five Character Descriptions I Am Too Lazy to Novelise,’ which shifts between the nonsensical and the macabre; and ‘Waiting For the Toast to Pop,’ the best poem on the subject of toast I have come across.

Comedy’s not the only string to Ascroft’s poetic bow. While many of the poems are clearly the work of a humourist, I also had the strong sense throughout of being in the company of a semiotician. This feeling continued with the poem titled ‘Never Was a Semiologist.’ With a background in linguistics, Ascroft is clearly interested in signifier and signified, and many poems in the collection eschew accessibility for complicated plays-on-words.