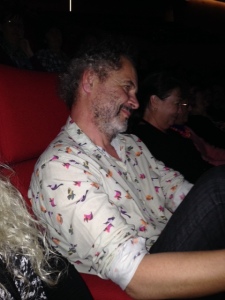 1.This year I was part of the programme for schools and families at the festival and what a joy that was. I have already written about this on my blogs but the two School Days are a gift to Auckland City. To have the ASB Theatre packed to the brim with students ranging from Year 7 to Year 13 (over the course of the days) was extraordinary. I sat in the audience on Day 2 and was surrounded by a hubbub of book chat on what had been seen and what was coming up. These students were inspired not only to read and write and think and puzzle and ponder and feel and laugh– but also to face the big issues on how to exist in the world as a human being. This is the power of words—the way they can move and transport and shape us. The way we can be challenged. To have a long snake of a queue of students telling me they LOVED poetry with such enthusiasm after my session was a tick for NZ poetry. As Rick Stein says about local food producers: ‘We need more of this!’  See my post here.

2. The inaugural free family events in The Herald Theatre were a hit. Children clustered in the foyer to hear my favourite picture-book author read (Kyle Mewburn) and more! And pack into the theatre itself to witness the word wizardry of the Etherington Brothers along with others. I made up poems of the spot with the 5 to 10s and it was oohs and aahs from the parents as magical words spilled out into the air. It was fun and warm and energising.

3. The number of free events is also a gift to Auckland City. It is an open invitation to everyone to join in this celebration of ideas, stories, experiences, traditions, discoveries in conversations at local, national and international intersections.

4. The extraordinary opportunities to see some of the world’s and New Zealand’s most beloved writers- think Alice Walker for a start, then Keri Hulme, Eleanor Catton, Lloyd Jones, Sam Hunt, Patricia Grace.

5. I missed sessions—if only I could zip back in time and see them but here are some of my highlights (you just can’t see everything and it was such a gloriously eclectic programme!). What stood out for me were the electric combinations of chair and interviewee– that moved the interview into the realm of conversation. And some outstanding readings.

—Eleanor Catton in a scintillating conversation with John Campbell. The blood pumping through was fueled by a shared passion and deep engagement with books, ideas, humanity. John started by saying, ‘The morning you won Ellie, there was a spring in the national step.’ Ellie had correctly guessed his star sign off stage (Libra) which was a terrific way to start. When John asked if she believed in astrology she said she was cautious about dropping an A Bomb too soon in case she lost the audience’s respect! These were some of Ellie’s standout comments: I value wonder, curiosity, belief. People who trust in relations are strong people in the world (that ties in with Patrica Grace’s view!). The difference between precision and pedantry is one of my dinnertime conversations. A mark of true feeling is if you speak it and people feel uncomfortable. Good ideas are always born out of bad ideas. I am grateful for the way Maori enable a connection with ritual. I’ve learned on the road how few forums there are for conversation (she is not asked to develop any strong statements she makes such as the way women are interviewed differently). Nobody can feel creative unless they truly believe there’s no right answer. Screwing up is impossible. You get older but the novel doesn’t; it’s funny, a snapshot of how you thought. You give pieces of the conscious, subconscious, unconscious. John wrapped it up by saying, ‘None of this seems to have corrupted you and we are really proud of you.’ It was one of those sessions where you walked out uplifted.

Elizabeth Knox was in dazzling form (rightly so, Wake and Mortal Fire are magnificent) and in conversatin with David Larson. Some gems include: In a YA novel you can’t deprive readers of hope. Wake is Mortal Fire‘s dark twin. When you put people in difficult situations, they can be amazing. My underbrain does a lot of thinking. As a girl I was very awake; now I am much more muted. I was always trying to flee from what the critic said. Silly. But now my toolbox is very big.

Cornelia Funke and I had a wonderful day exploring my favourite west-coast haunts. These two gems from her session stuck with me: You have to bottle up the magic and let it brew. The best things are not always loved by the majority.

Jim Mora to Alexander Smith-McCall: ‘You are very unusual writer because of your warm heart.’ Indeed! This was a session that filled us with warmth and laughter.

Hearing Caoilinn Hughes read from her terrific poetry collection (sadly I missed Alice Miller‘s reading as I was out west). It’s not just the Irish accent that gets you but the heavenly tilt of the words themselves. I did not want her to stop. See my review of Gathering Evidence here. Listen to her read on Kim Hill here.

I only got to hear half of Alice Walker in conversation with Selina Tusitala Marsh as I had to dash to the green room but it was utterly moving. This is some of what I took with me: The subjugation of women is what drew readers to The Colour Purple and the question, Who is God? At 70, I have been working for 50 years for women. The feminine is lacking in global power– we need a radically different system. Revolution has to start in your heart with tenderness; you have to feel your own pain, as John Lennon said– not just blood, bombs, name calling.

Hearing Adam Johnson read. He started by saying, ‘I am going to read this from deep in the novel so it won’t make sense.’ He started reading and you were immediately transported. Astonishing.

Hearing Tina Makereti read from her wonderful novel where The Rēkohu Bone Sings. How I love this novel–so to hear her read in her melodic tones was such a treat. See my review here. Then Fiona Kidman read from hr new book, The Infinite Air. I got so caught up in it, in the voice and the pace–I could hear poetry running through the bloodline of the words (as I had with Tina’s). This is now on my must read list. I missed the other two readers sadly.

AM Holmes and Paula Morris was a genius pairing. Effervescent conversation that took you in countless glorious directions. Here are some of my favourite gateways to thought: I just gather the outsiders and hold them close. I think of myself in positive and negative ways as a very American writer. The future is going to be what you can imagine (on teaching writing). I eat more if I inhabit a man (on writing male characters) — I like writers different from me. I will not run away from what a character brings up (on self censorship); I take risks.

Eimear McBride was a startling wondrous discovery. To hear her read from A Girl Is a Half-Formed Thing was to hear what extraordinary things fiction can do when the writer is bound by nothing beyond her desire to tell stories. This from Eimear: I want to bring language back to before thought becomes clear. There is a wider truth you tell about yourself when you write fiction. They are anonymous– and they are anonymous to themselves (on her characters lack of names). A good healthy sense of failure is an important part of being a writer. My interest in poetry is in its licence and how it’s bigger than the words on the page. I had to make language something else to try and express emotions and feelings (on women’s writing).

Finally Patricia Grace provided a high note as an end note. She read beautifully and engaged in a delightful conversation with her former publisher Geoff Walker. What a fitting author to honour. The room filled with her warmth and wisdom– her humanity. Some high points for me: I like to write about communities, relationships. For a long time I didn’t know what writing was as we didn’t have a model. I really appreciated Katherine Mansfield but she was removed from me by time and class. Ever since I have started writing, it has been about ordinary, everyday lives of people — and I still do this. Everything belongs to the characters- the themes, language, setting, stories. Having a lot of characters is a feature of indigenous writers. We belong in families and in the community of ancestors. I was aware I was going to write about people who had rarely been written about. Writing is very important to me– if I couldn’t write I’d be much poorer.

It is a gift to Auckland that the festival hosts such a fertile occasion where we come to share and engage with one another. As both a reader and a writer, I thank Anne O’Brien and her hardworking, visionary team from the bottom of my heart. Thank you!

1 thought on “What I loved about the Auckland Writers Festival”