Flash writers on writing flash and what it means to them:

My tips: Don’t beat around the bush. What you omit is as important as what you say; there’s beauty between words – in the space you create, at the edges of the story. Don’t go for gimmick. Edit: when you think you’re done, cut it in half. Quality over quantity.

It’s about control of language, perception of human nature, originality, emotional power. A lot has to be done by insinuation and subtext, every word has to do its job. It really has to have something to say.

It’s like when people tell a story. They don’t use a lot of words but they still tell it in a way that you understand. In a lot of modern fiction, they like to try and stay mysterious, but when you’ve only got a certain amount of words you can’t afford that luxury.

There’s something quite cool about finishing something; the satisfaction of actually having something completed. I just try to write about the things that are happening with the people in my life. It’s important to me that those little things that happen in people’s lives that are maybe looked over and seem quite mundane, that those things get written about as well.

Flash leaves room for the reader to respond, you can publish on your own Facebook page, people get used to being efficient with language. As a tutor, it’s good for teaching students about using imagery to suggest, rather than spelling it all out. Most of all you want something that lingers in the mind; so you put it down and it’s still with you half an hour later.

For the rest of today’s Sunday Star Times article with comments on Flash Fiction by other writers see here. 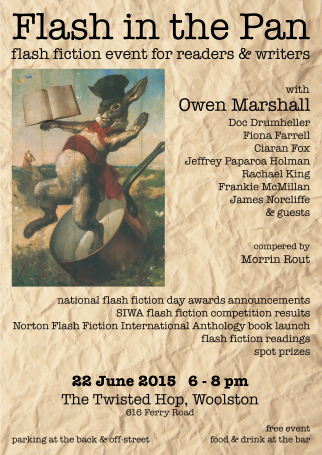 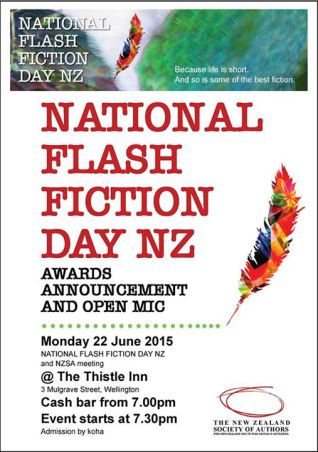 Other Flash Around Aotearoa

Whangarei Libraries is sponsoring a Northland flash fiction competition for the fourth year in a row. Competition has already closed but the winners will be declared at a special awards ceremony on Wednesday 3 June 2015, 5.30 pm in May Bain Room, Whangarei Central Library.

Short-listed stories will be read and winners will be announced. All are welcome.

The NZ Society of Authors Otago Southland Branch is holding a Flash Fiction themed Writers Salon on Monday June 8 at The Thistle Cafe & Bar in The Octagon.

We will feature eight writers reading work of 500 words. All selected contributions will include the word flash in one of these forms:

inside.out runs open mic spots for writers of any experience or genre. Stories and poetry are illuminated when read aloud or performed. Meet other writers as well. Excellent musicians and competitions with prizes at each event. The cafe is licensed with hot snacks and great coffee.

Entry by koha, which goes to the musicians that night.

Come from 6pm; open mic starts at 7pm.Let’s hear what you’ve been working on…

Short Is Sweet — Flash event at the Masterton District Library on 23 June. All are welcome!

This year, regional awards for the best flash fiction stories entered in the national competition are being offered by the NZ Society of Authors branches in the following regions:

Regional Awards will be announced on June 22. NFFD is excited and grateful to have the support of the NZ Society of Authors branches.

If you would like to organise something in your area, get in touch!

And if you happen to be in the UK the following week, after our June 22 events have closed, check out the UK NFFD. June 27, 2015. Details here.

Years and years ago I bought an anthology called Sudden Fiction and I loved the way the writing fell on the page in bright drops. Were the miniature pieces agonised over and crafted to a sweet and shiny essence or were they a quick and vital shedding of narrative (stream-of-conscious-like)? Tiny. Surprising. Saporous. I don’t remember such details and I can’t find my weather-beaten copy but I do remember the way the anthology sparked my attention.*

Nowadays, look each way and you find Flash Fiction.

National Flash Fiction Day is New Zealand’s celebration of the shortest form of fiction writing, on the shortest day of the year.

The 2012, 2013 and 2014 competitions were great successes with 300 entries each year. You can find the winners from previous years by clicking on the tabs at the top of the page.

In past years, National Flash Fiction Day has been celebrated with prize-giving ceremonies and presentations by the judges as well as readings in various hotbeds of flash all across Aotearoa.

Events will be posted on the website as they are put together this year.

*Ha! I went online and discovered this:  ‘Here Are 70 of the very best short-short stories of recent years including contributions from such contemporary writers as Raymond Carver, Leonard Michaels and John Updike; a few Modern Masters as Hemingway and Cheever; and an assortment of talented new young writers. Sudden Fiction brilliantly captures the tremendous popularity of this new and distinctly American form.’ The book was published in 1983 so I was living in London. Maybe I left it there. I am sure there were women in it! But I can’t recall.