This is the first in my new series. I phone a NZ bookshop, they suggest a NZ book, I add my NZ pick, and they pop the books  in the mail for me. I am using my Wellington Writers Festival fee to spend on books.

Carol Beu, from The Women’s Bookshop in Auckland, recommended Becky Manawatu’s Auē (Makāro Press, 2019), shortlisted in the 2020 Ockham NZ Book Awards Fiction Category. She enthused about this gripping narrative – and I had already been tempted by reviews. I picked Damien Wilkins’s YA novel – Aspiring (Massey University Press, 2020). The book was unable to launched in the traditional sense so newsroom posted Damien Wilkins’s launch speech. To help promote the book I am including a Q & A.

As you can see I never leave a bookshop empty handed and always add a few extras. Two authors I am big fan of got popped in the parcel – so can’t wait to get stuck into new books as I am imposing semi self isolation.

First sentence from Aspiring: ‘Pete’s was where I had an after-school job.’

First sentence from Auē: ‘Taukiri and I drove here in Tom Aiken’s truck.’ 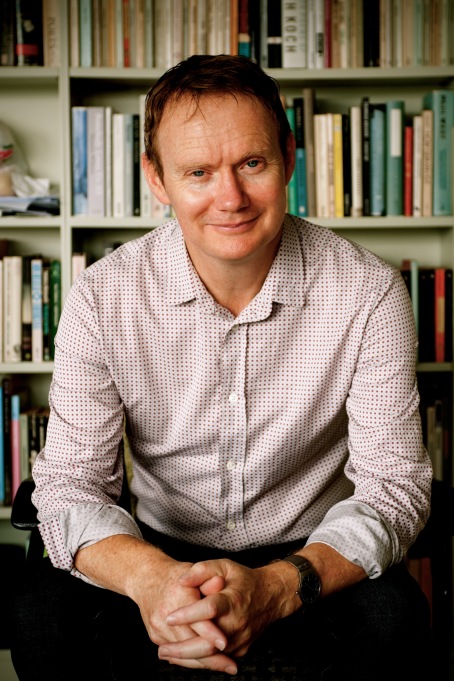 I have no idea! At no point did I think ‘I must write a YA novel’. I’d always wanted to write about the Gateway Arch in St Louis, this beautiful and quite strange public monument. I lived in St Louis for two years. The arch always seemed to me to be unconnected to the world. It’s spectacular but also plonked there, as if by aliens. A long time ago, I wrote twenty pages of an adult novel featuring the architect Eero Saarinen, who designed the arch. But I abandoned it. I knew nothing about architecture. Then I wrote a song about him and recorded it on my first record. That was that, I thought. But then somehow the arch came back and got caught up in the story of this New Zealand boy. Nothing is planned!

Q2: Liberating to write, or tough to work within the confines of the genre?

There are confines? I didn’t really think about the genre. This is a book about a young person from a young person’s point of view. Once I’d decided I would never leave Ricky’s mind, the idea of an audience was settled – Ricky is speaking to himself and his peers. I didn’t want this novel to feel like ‘adult fiction writer Damien Wilkins on holiday’. I was always trying to write the best sentences, the best scenes, the most alive story I could write.

It’s Wanaka put through a filter, sometimes put through the ringer. You touch something with language and it changes. I needed the freedom to say things that are incorrect and even unfair about the real place. I didn’t want the reader to say ‘Oh, he got that wrong’.

Q4: How much time have you spent there and what struck you about the place?

I’ve been visiting and staying there for thirty years. We have family connections. The obvious and true thing to say is that it’s a beautiful place to put a town. The mountains! The lake! And over the decades that beauty becomes a magnet – more people want to be there. Retirees, escapees, people of means, tourists – we’re all drawn there. How to manage that growth? It’s a place of privilege of course, and not very diverse. And I became interested in what happens behind the scenes in a place like that. And what it would be like to grow up there, especially if you don’t really share the values of the place … It’s all probably a thinly disguised version of me growing up in Lower Hutt in the 1970s, except we just had boring hills to look at!

Q5: Ricky is so likeable. To what extent is he an amalgam of all the terrific sixteen-year-olds you’ve come across?

Boys of this age get a bad press. I wanted to write a little hymn to their internal lives. Those lives now seem more compressed, more stressed. There’s a lot of anxiety around. I think it’s disastrous for everyone the way that young males are still educated away from the life of feeling.

Q6: At one stage Ricky thinks, ‘Put away childish things’. That seems all that needs to be said about the fraught process of adolescence, doesn’t it?

If only! I think the novel catches Ricky at this weird moment where his body is outstripping his brain and his emotional resources – his sudden tallness and bigness gives him access to an adult world he’s not ready for. He grieves for his old life as a child but is also excited by and drawn to the possibilities of the future. He knows, however, that the planet’s future is dire. But there’s something else too. I mean, it’s not as if Ricky’s dad is a model of emotional maturity. I hope the novel gives a picture of people of all ages in the process of becoming, of trying to work out things, of trying to shift. I don’t believe in these clear-cut categories of human development – ‘and now you have emerged from the chrysalis!’ A lot of us still have bits of chrysalis stuck in our hair.

Q7: It’s such a painful time but do you also envy your characters their youth?

Of course! I’m old. I have two daughters in their twenties. But then it’s impossible for me to know what it’s really like to be sixteen now. There are lots of signs that it’s not so much fun. I put some of this in the novel. I also wanted to show the resourcefulness of young people, and the endless search for pleasure.

Q8: And they gave you a great opportunity for jokes and whipsmart dialogue.

Kids are quick. I envy the speed of their minds. The dialogue between Ricky and his friends, and Ricky and Keri were the most enjoyable parts to write. If you don’t have power, you still have talk.

Q9: Adults will no doubt end the book feeling protective, even anxious, about Ricky. But what do you think young readers will feel?

I hope they feel that they’ve read about someone who has gone through something and come out the other side not just intact but with a renewed sense of his potential and his power. I’ve always liked that thing that Maurice Sendak said about children protecting adults from the truth. You really don’t want to upset your parents by letting on how much you know.

Hope is important. He hasn’t solved anything but he’s in a relationship, he’s having fun, and his family is in a better place. Ricky has successfully protected his parents from the truth about his life! Good on him.