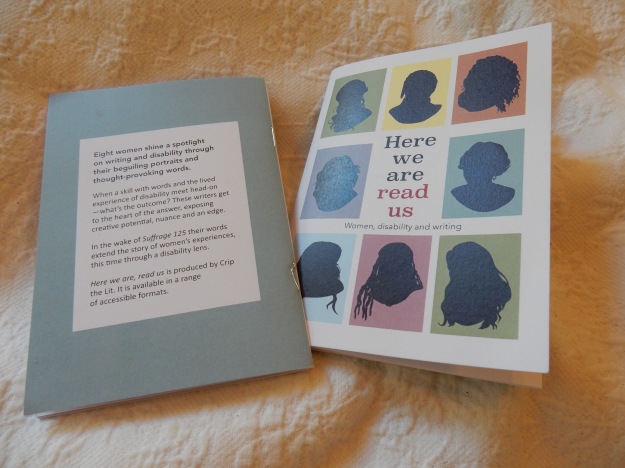 Here we are read us Women, disability and writing ed Trish Harris (Wellington: Crip the Lit, 2019)

In 2016 Robyn Hunt and Trish Harris established Crip the Lit ‘to celebrate and foster the work of Deaf and disabled writers’. Trish explained further in an email to me:

We chose ‘There is no such thing as a disabled writer. We are all just writers’ for our debate topic at LitCrawl (2018) because we wanted a moot that could be argued–in an entertaining and feisty way–either way. And that’s what we got! We want to open up those kinds of conversations but Crip the Lit also makes a stand saying there’s an important voice under represented in mainstream New Zealand writing and that is the voice of writers who have an impairment/disability–people who can write about this topic from the inside of the experience.

Crip the Lit has produced a slender pocket book, Here we are read us, that showcases eight writers who all live with disability. The writers include memoirists, novelists, poets, essayists, playwrights and bloggers from across New Zealand/ Aotearoa. Most of them seem to do poetry in some form or another!

Each writer has written about their chosen symbol, living with the experience of disability and their writing choices.

There is a section where each writer responds to the question: Why do you write?

This is how Tusiata answers the question:

I write because there’s an itch or a spangle and when I give it attention and space it expands to something full blown. It teaches me something. I write because sometimes the spirits are whispering and if I put pen to paper they will speak.

The pocket book is also available as large print format, an audio book, an e-book, individual social media files on each writer, in Braille and DAISY audio.

I love this pocket book because it brings disability out into the open – it took Tusiata awhile, for example, to expose her epilepsy in poetry beyond hints and traces. The pocket-book writings not only open out the daily challenges that each writer faces but confirm the notion that the ways and hows and whys of writing are utterly diverse.

Huge admiration to the editors for bringing this uplifting project to realisation. It is a gift.