Some of my most intense local poetry reading experiences this year have been as a literary editor, working my way through hundreds of poems and finding something wonderful in many of them, and then cherry-picking from these for Landfall 229 and Landfall 230; but beyond that the stack of new slim volumes looms, and I’ve elected to mention four poetry collections I enjoyed musing over.

‘No, not Bali or Samarkand. Take/ me down to the Dominion Road . . .’ Peter Bland commands in his collection Expecting Miracles (Steele Roberts), drawing you in immediately with his canon-echoing rhythms and decluttered simplicity. His poems have a casual, conversational tone that belies their craft, bolstered by an oldster’s genial humour and air of wry bemusement at the oddity of the quotidian: he’s a metropolitan in a provincial culture.

Gregory O’Brien‘s Whale Years (Auckland University Press) navigates its way around the South Pacific as if following the drift of ocean currents. In this collection, he’s a beachcomber pointing to curious flotsam and jetsam. His poems are mantras, notations, journal jottings, gatherings-together of cadenced imagery, and compelling in the way they combine astrological zodiacs, weather balloons, shipwrecks, islands. Collectively, the sense is of a star-trek odyssey, recapitulating ecological markers of the anthropocene era, Notably, too, the exoticism of travel helps generate a semi-arcane vocabulary, serving to align his verses with the baroque wing of New Zealand poetry: there where Kendrick Smithyman sculls in the sunset.

I was also very taken by the skewed reminiscences in Morgan Bach‘s first collection Some of us eat the seeds (Victoria University Press). Spiky, terse, yet also lyrical and tonally subtle, they recount a sense of adolescent awkwardness and estrangement, almost as if at times she’s ogling the outside world and its emotional coldness from her own private igloo, growing up in small town provincial New Zealand and longing to be elsewhere. But if she offers a return to childhood as a rejection of the sugar puff Disneyland of a commodified Nineties environment, she does this by crafting a version of Banksy’s subversive Dismaland: ironic, comic, sharply observant about the advertised ‘great expectations’ we have been led to expect from the product called ‘Life’.

Her poetic intuitions result in a cleverly-written-up sequence of what might be termed out-of-body experiences: the feeling of towering over shuffling Japanese passers-by in Tokyo; watching her screen-actor father die successively in movie after movie; and then ultimately a kind of ecstatic insight that turns her collection full circle: ‘the way you felt swimming/ in the rain that hammered/ when you put your head above water to see/ lightning flash in the pitch of the sky’ (‘The swimming pool’).

Frankie McMillan‘s There are no horses in heaven (Canterbury University Press) contains a multitude of poems rife with the storyteller’s art, proving her a kind of fabulist, distilling states of enchantment and sometimes states of disenchantment into a few lines ever so lightly and delicately, so that her shortish poems seem to musically chime with one another. And it’s as if you can carry them with you wherever you go. As she puts it: ‘What I want to say is something small/ enough to hold within the crook of my arm/ and that is not the half of it’.

And then there’s her poem ‘Observing the ankles of a stranger’, about a tourist being startled out of her wits when Ruaumoko’s seismic fists of fury pummeled central Christchurch almost into the ground on February 22nd, 2011. Here enchantment— or metamorphosis — takes the form of feeling lost in a familiar habitat as the dust settles. We need more such terrific poems. 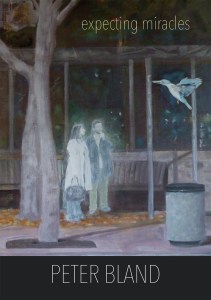 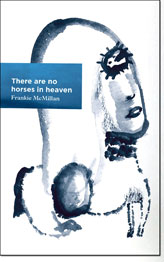