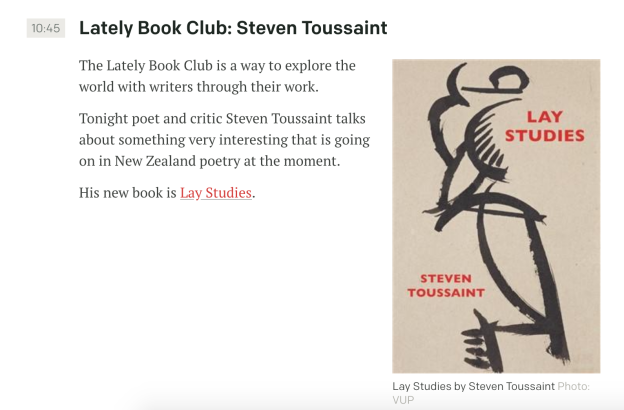 This is a terrific conversation –  listen here.

at the Spinoff:  ‘TMI: An essay on contemporary poetry in Aotearoa/New Zealand’

‘This much is obvious: something electrifying is taking place in New Zealand poetry. I became a permanent resident of this country four years ago, and at that time I privately considered verse here to have grown a little stale. While stand-out collections frequently knocked me over – among them Amy Brown’s The Odour of Sanctity (2013), Chris Holdaway’s Six Melodies (2014), and John Dennison’s Otherwise (2015) – my general impression was that a nostalgic suburban quietism had captured the style, tone, and subject matter of New Zealand poetry, calling to mind James K. Baxter’s warning to denizens of this ‘Happy Island’ that ‘one of the functions of artists in a community is to provide a healthy and permanent element of rebellion; not to become a species of civil servant’. Since then, however, a talented cohort of writers in their 20s and 30s, many of them women, LGBTQ, and people of colour, have exploded onto the scene in a searching and incendiary spirit, and have transformed the literary landscape irrevocably.’

Steven Toussaint, from the Spinoff essay