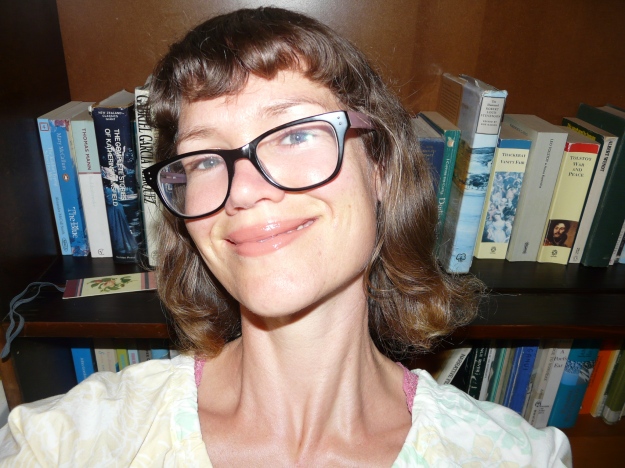 The thing is, Neil, you are all of us

You are the old rocker in skinny jeans

who is mumbling in the corner

you are the punk who fixes bicycles

at two o’clock in the morning.

You are the comic book girl in combat boots

whose breasts are drawn too large

you are the feminine librarian

who wants to go on a rampage.

You are the community gardener

with home-cut hair and knee holes

you are the bespectacled chicken rescuer

the guitar player and the police mole.

You are the tofu thief made to work

for the local Salvation Army.

They throw away about half of their clothes:

take as many as you can carry.

Author Bio: Airini Beautrais lives in Whanganui with her partner and two sons. She is currently working on a PhD in creative writing through the IIML at Victoria University, on the subject of narrativity and verse form in contemporary long poems. Dear Neil Roberts is her third book.

Author note: ‘The thing is, Neil, you are all of us’ is one of the first parts of the book I wrote, back in 2011. I had known Neil Roberts’s story for some time and it had occurred to me it would be interesting to write a long poem about the incident. One of the things that struck me early on in my research, from reading various anarchist/ libertarian communist web entries, was the sense of ownership amongst these radical left communities for the story. It was as though each person who had re-told the story, while not endorsing Neil’s act, could identify with the way he must have felt. In this poem I drew on my own experience within the Wellington anarchist scene – although not every detail is ‘true’, the characters in this poem do approximate real people, myself included.

Within this poem the ghost of an accentual meter can be heard, and the metrical scheme, while loose, is something near the traditional 4, 3, 4, 3 ballad stanza. And it is off-rhymed, xaxa. Perhaps the ballad was lurking behind the scenes all along. It has been mentioned that Dear Neil Roberts is rhythmically close to prose. I think this is true (as it is for a wide range of contemporary free verse), but I also think that writing to a regular stanzaic shape can lead to some interesting effects. For instance, rhymes frequently occur at line-ends. And there are lines in the book that are straight iambic pentameter. It has to be remembered that poetry is a genre, and can be written in verse, prose, or any combination of the two. Writing Dear Neil Roberts as a poem allowed me to present, juxtapose and interpret information in a different manner, than if I had set out to write an extended essay or a work of New Zealand history.

Paula’s note: Not having read Airini’s note before I wrote this, I didn’t have the back history (which is fascinating!). The poem is placed near the end of her collection, Dear Neil Roberts, and traverses Neil’s story with a foot planted in the realm of invention and another within the scope of research. Forming some kind of arc across—or conversely a simmering stream below—these two choices, is the personal. Airini allows herself, her own history and predelictions, to enter the poems.

What struck me about this particular poem is its ability to move, to raise issues and to offer delight at the level of technique. The parade of chalk-and-cheese characters turns the narrative impulse over and positions you as reader squarely within the frame. The poem now addresses ‘you.’ Yes, you might be any one of these characters that, like Neil, might test boundaries or go to extremes, but there are other issues at work here too. We are all destined, in the main, to occupy the shadows of history (as did Neil) as opposed to being a key player. If there is a potential Neil at work in this parade, there is also the way in which the parade is at work in Neil. We occupy many roles, play many parts, with varying degrees of visibility and attachment. These possibilities move me, as they return me to the complicated, contradictory, and at times unfathomable make-up of what it means to be human.

If the poem flips your placement as reader, the final two lines flip your placement within the poem. Again the resonances are multiple.The cheap clothes. The bag to be filled. The societal waste. Yes we have roles but we always have needs. We are linked by common needs whatever complications are steering our lives: warmth, shelter, food.

You can read this poem as prose-like in its poetic intentions yet, as is so often the case with Airini’s poems, there is more at work here. For me, I was hooked by the aural chords that make different semantic connections. For example, I loved pursuing the ripple of ‘m’s’ (mumbling, morning, feminine, community, home, mole, army, many) and the way they are honey for the ear yet forge a buried story. This poem, as does the book, relishes the white space, the gaps, the ambiguity alongside the more prosaic intent of telling a story, bringing someone closer, circulating ideas. It is a poem that haunts me, and in that haunting, I keep returning to the lines to reflect upon ‘why.’ Marvelous.