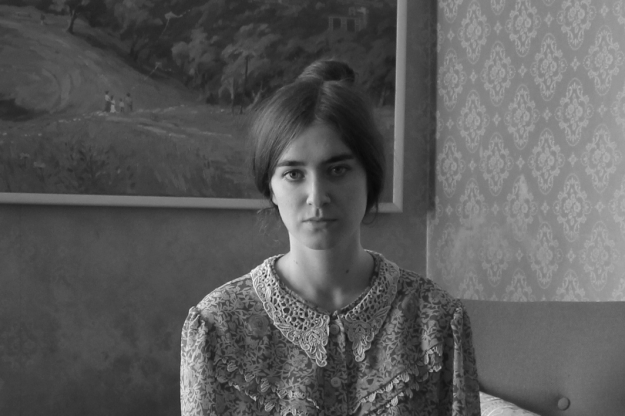 Rachel O’Neill has interviewed Zarah Butcher-McGunnigle for Poetry Shelf to mark the arrival of their two debut poetry collections (Hue & Cry Press). I will be launching both books on 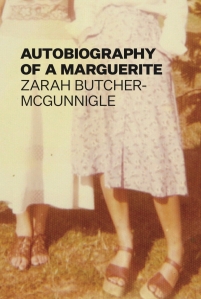 The Marguerites: an interview with poet Zarah Butcher-McGunnigle

A book-length poem is no easy feat, and Zarah Butcher-McGunnigle has achieved this coup magnificently in Autobiography of a Marguerite, creating a visceral and emotionally sparky long poem haunted and stalked and befriended by a host of Marguerites as well as other identities shaped by illness, crumbling and strikingly intimate family relationships, and language in which the adults’ voices break like teenagers, while the ‘young people’ make a note to have more snacks in their bedrooms to survive the strange new flow of time.

Rachel O’Neill [RO]: Who was the first Marguerite? Did any of the Marguerites beget a Marguerite?

[RO]: Can you describe three things that interested you about the process of putting this collection together?

[Z B-M]: When I first read this question, I wrote: pain, identity, burden. Then I wrote: texture, experience, subversion, non-linearity. I was interested in working on a book-length poem or project rather than writing individual poems that I’d put together at the end in a collection. So I guess I don’t really see the book as a ‘collection’ as such. I wanted the book to be more of an experience. I was interested in autobiographical writing, but I also wanted to write poems that were more ‘language-centred’. In the early stages, my supervisor said there was too much situation, and not enough story – that I needed more structure, more narrative, and more from the outside word. So I tried to adjust the balance. I wanted the pieces to speak to each other and cumulate meaning as the book progressed, but I also had to think about ways to counter the risk of repeating or pushing too hard at certain ideas [when exploring things in long sequences].

[RO] What happens when you start to make objects and subjects out of memory?

[Z B-M]: “It’s the beginning of forgetting.” “The room is empty. The only furniture is two chairs and a table.” “She switches on the lights. And lies herself down in the middle of the light, where she has dragged the sheets.”

You can get lost inside the memory and become exhausted, trying to navigate it from the inside. You can decide to alter a memory and write something that isn’t ‘true,’ but then later that something can turn out to be ‘true,’ or more accurate to ‘real life’ than you thought.

[RO]:Can you tell us a little about your use of footnotes in the book? Are they apertures to things outside of the main text or do they point to the holes already blistering the so-called main story?

[Z B-M]: The footnotes function both as openings to things outside of the main text as well as pointing to holes in the main story. The footnotes interrupt the ‘absorptive’ flow of the confessional narrative, but their tone is more lyrical than academic or explanatory. They add another layer of time and identity. All of the footnotes come from novels by Marguerite Duras and Marguerite Yourcenar, so a Marguerite comments on the life of another Marguerite. The footnotes act as a kind of fragmented (auto)biography of the books they come from, while adding details to another redacted autobiography… and the autobiography is a story within a story. The footnotes exist in a different time space than the main text… and the narrator who is writing the autobiography put the footnotes there as part of a way of reinterpreting the past in the present, sometimes adding metaphorical details, sometimes adding self-aware notes like, ‘Cheap melodrama’. I also see the footnotes as another voice, another monologue, in the play of Marguerite’s life. Or maybe like experimental stage directions. The reader experiences both being a witness and an actor (like the narrator) because they have to participate in piecing together the main narrative text as well as welding the footnotes to the text.  The form (the half-finished sentences + the footnotes) is a kind of performance of the process of remembering, and reinterpreting the past.

[RO]: What draws you to reflect on moments of miscommunication and the scary moments of real understanding?

[Z B-M]: Because something has to be at stake – for me as the writer, and for the reader. “‘Pain is not interesting,’ but it is.” And your whole life script can be based on a few moments of miscommunication.

[RO] Does illness mean you locate yourself in time differently? And what was your motivation for giving visibility to illness in the book?

[Z B-M]: I think so, yes. Because illness is a way of measuring time… (Oh, I used to swim every week back then, before I got sick… We moved here a year after I got so sick, so that must be seven years ago, now… That was the summer your father got so ill he almost died…). I’m talking about chronic illness in particular. And in my experience, you can feel both as if you’ve lost time and as though you’re stuck in time. You remain [the age you were when you were diagnosed]… you didn’t have the chance to live in a way like other people did [at that age] to have the experiences other people did, because of your illness. If you have to spend months at home resting, you can feel as if you are wasting time or losing time. And the trauma that illness may bring can also lead to not being able to remember a period of time very well, as a defence mechanism… so you look back [on your life] and you say, ok, I remember going to the hospital and I remember sitting in the lounge for a while, but I don’t know what else happened during those five months. Illness also means you locate yourself in time differently because the way you use your time and the way you view the future will most likely change. Maybe the future seems much more uncertain and frightening now that you are ill. The symptoms you have are not just concerning because they are happening right now, but because of what they mean for how your life will be from this point on. Time passes, and you are still sick, so you have to get used to it, or you have to get used to not getting used to it.

Thinking and talking and writing about illness seems interesting and important to me. In particular, how illness shapes the way someone sees themselves, and how others see them. How does a person deal with their illness? How do other people react, and how does the reaction of others alter the way someone deals with their illness? Does illness become part of a performance? Is illness (socially) rewarded or punished? What value do we give illness x or y? How does it affect relationship dynamics? I guess I want people to think about these things… as well as perhaps gain more understanding and empathy for people they know with a chronic illness. It seems also important to give visibility to chronic illnesses because they are often ‘invisible’… in that there may be no physical signs apparent to friends or people on the street, and so when people do find out, they often say things like, ‘Oh, but you don’t look like someone who would have [x, y, z]…you look too young to have it!’ or ‘But you look fine! You don’t look sick… ’.

Early on though, I realised I didn’t want to write about a journey of a particular illness, with all the medical details and experiences. I wanted to explore the social aspect of illness in relation to identity and family, and I wanted to use illness as a concept, to illustrate the struggle for autonomy and a sense of self, tying it in with a relationship where the daughter struggles to separate herself from her mother. And although I don’t name an illness, I do mention that it is an autoimmune illness – another detail which symbolises/highlights the struggle for a sense of self. The immune system is a boundary between you and the outside world, and the first task of the immune system is distinguishing self from non-self. Autoimmunity occurs when the immune cannot recognise what is self and non-self, and begins to attack its own tissues. In the book, it is sometimes difficult to distinguish the mother and the daughter, particularly in the second section with the footnotes. The footnotes could also be seen as a kind of autoimmune illness, attacking the main body of the text, the other Marguerites.

[RO]: What was the last boring thing you did that also gave you a lot of satisfaction?

[Z B-M]: Probably… responding to a couple of emails that had been in my ‘flagged’ pile for ages. Going through my inbox and flagging emails is also kind of satisfying.

Zarah Butcher-McGunnigle’s work has appeared in a wide range of publications, including Hue & Cry, the publisher behind this book. You can get a taste for her work by checking out Best New Zealand Poems 2011 and 2012 and the latest issue of Hue & Cry. She was awarded the Biggs Poetry Prize from the International Institute of Modern letters for her manuscript, the first rendition of Autobiography of a Marguerite. You can find out more about the book here or pick up a copy at the Auckland launch.