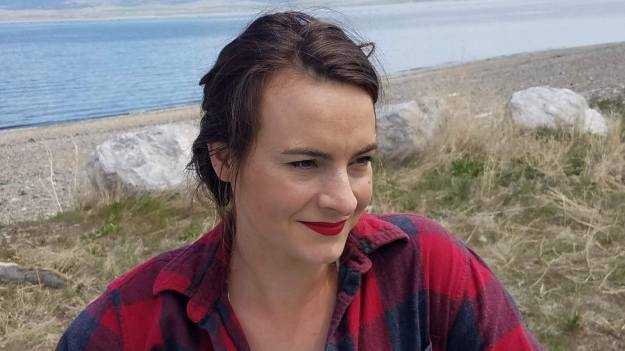 for a fishing net

from the water with

caught in the net?

Amy Leigh Wicks holds a PhD from the International Institute of Modern Letters at Victoria University. Originally from New York, her debut collection Orange Juice and Rooftops appeared in 2009 while her poetry has also appeared on The Best American Poetry blog and in several local journals. She lives in Kaikōura with her husband.

Amy Leigh’s new collection The Dangerous Country of Love and Marriage is an intricate weave of themes, motifs, forms and sound effects that offers much for the reader. Strangeness and discomfort sit alongside beauty and soul searching as a woman writes between her birthplace and her new home. The enigmatic gaps in the narration are counterbalanced by sumptuous detail, exquisite images, tiny admissions; the melodic lines build both the music of place and the music of character. As much as it is a physical world marked by mountains, oceans, anchors and salt, it is an abstract world marked by conversations with God. It is a collection that has stuck with me.

Paula:  When did you first start reading and writing poetry?

Amy Leigh:  I remember coming across a box in my grandparent’s attic when I was about seven.  The box was filled with mostly handwritten poems by my Grandma.  They mostly rhymed, and her writing was in cursive, so I couldn’t make out all the words. I felt I had found a treasure box.  Later, I locked myself in Grandpa’s office and emerged however many hours later with a poem I’d written that I gave to Grandma.  She cried a little when I read it aloud to her, and took me out for an ice-cream sundae, which was as good as winning the lottery as far as I was concerned.

Paula: Oh what a wonderful memory. Were there any poetry turning points and/or epiphanies between that young girl writing and your recent collection?

Amy Leigh: A whole sky full of stars map the journey between little Amy Leigh writing and this collection.  The epiphanies and turning points are bright pinpricks against a darker subconscious, and the constellations that I see, clear as Orion, are comprised of poems, lectures, exhibitions, drawings on napkins.  Reading Nikki Giovanni’s poem Ego Tripping in high school alongside Shakespeare’s sonnets; sitting in Lorene Taurerewa’s Brooklyn studio as she described walking to school beside the barefoot James K. Baxter in Whanganui; working on sestinas and villanelles with locals in Kaikōura after the 7.8 earthquake: these are some of the influences that shape the way I read and the way I write.

The house is quiet and then the sound of bees

gather at my head. Will you let me be swallowed

by this? Another wave, another scalloped

rim of water on top of quiet water.

Paula: Your new collection weaves multiple themes and poetic effects. I view it as both a long narrative poem and a sequence of intensely connected pieces. What do you like your poetry to do?

Amy Leigh: When selecting poems for this collection, I wanted the reader to be able to let the book fall open and read a single poem without feeling they’d missed something vital. I also wanted a cover-to-cover reading to feel like one unfolding narrative that moved forward in time and backwards through memory in order to recover things that may have been lost along the way.

When the roof is pried from

the house and I am a sardine

what will you say to me?

I see your hills, and yes,

every night a different

rattling the handle behind it.

Paula: At times it felt like poetry as prayer. Did it ever feel like that to you?

Amy Leigh: Very much.  The sestinas offer a sort of liturgical reprieve, and Epiphany deals directly with the uncertainty and catharsis of prayer—‘it was just me, alone with the bruise/ of a bad decade, finally asking toward the sky/ for a little help, shuddering ugly tears until/ I was dry in the silence of an answer I’m still/learning to understand.’

the air and I do

not know if I

carried it or of

Paula: I am drawn to the way the collection layers the strange, unknowable and the unsettling within the context of a marriage and multiple homes. Does it make a difference where you are when you write?

Amy Leigh: Yes, I believe it does.  I’ll write where I am, regardless of the environment, but Kapiti Island at sunset in Plimmerton, wooden tables cluttered with tea cups at writing group in Kaikōura—these things affect my writing the way altitude, rainfall, and sunlight affect the flavour profile of a coffee bean.

Where else is there to go once I’ve got

paper, a new pencil with a green eraser

and half a peanut butter and jam sandwich? If

I could erase one year of my life

Paula: How much of yourself do you let into the sequence and how much do you hold at arm’s length? In some ways I see the poems as both losing and finding things (including self).

Amy Leigh: While the poems in this collection are based on happenings in my life, the only confessional elements of the work that I’ve retained, are those elements that feel necessary to the advance the poem, or the collection. I have kept and discarded facts intentionally while putting this book together, in an attempt to perform the artist’s task as Louise Gluck describes, which ‘involves the transformation of the actual to the true.’

Paula: I have many favourites (‘Psalm II’, ‘Psalm III’, ‘Water Song’, Psalm X’, ‘Log No. 4’) but which poem particularly resonates for you? In either subject matter or resolution?

Amy Leigh: It depends on the day for me. Usually my favourite poem is the one I’ve just finished writing, until a bit of time goes by and I can look at it more objectively and less like an offspring of mine that needs nurturing. At the moment I’m fond of ‘Remnant’.  Just a little poem, but it makes me smile to be sharing a personal revelation that I find a little embarrassing in such a public way.

Once I said, I want

to be a lawyer, a doctor,

Paula: Are there any poetry books that you have read in the past year or so that have particularly mattered?

Amy Leigh:  I’m reading Sugar Magnolia Wilson’s Because a Woman’s Heart is Like a Needle at the Bottom of the Ocean at the moment.  I met her at a reading in Wellington recently, and I felt as if someone had filled the room up with champagne while she read her work and we were all floating in it. Her voice and her words had this incredibly soft effervescent quality. Then when I held the book in my hands and let it fall open (which is what I like to do first before I begin reading a collection from start to finish) I opened to Full moon celebrations and I thought, this is really something.  To feel such resonance and joy at reading a stranger’s words is an incredible thing.

Paula: What do you love to do when you are not writing?

Amy Leigh: I love to dance and cook, and paint, although not usually at the same time. I also love to curl up with a stack of books on a rainy day, but if I’m not careful, before long I end picking up my pen and notebook.