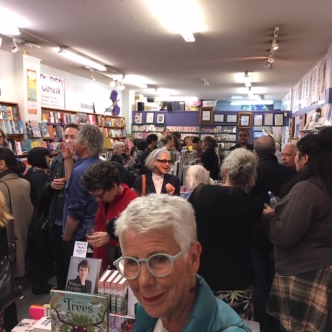 Richard von Sturmer launched Anne Kennedy’s new novel, The Ice Shelf, with a terrific speech. He had devoured a large chunk of the book then stopped because he was drawn to find the right place to finish it. He ended up in an elsewhere motel named Cicada, in  Kihikihi, a small town near Te Awamutu.

The readings of the book, both comic and serious, meant  today I can’t settle to anything else. I just want to open up the book and get reading.

Lovely to see The Women’s Bookshop packed with local writers and readers along with publisher Fergus Barrowman – as Richard said the book resembles an iceberg that has floated off into the world and will perhaps melt in our imaginations. Such an image matches the spectacular cover by Ant Sang and the spectacular presence of Antarctica – with its implications of silence, beauty, threat. I drifted off from the details of the book because there is nothing better than launching into a book from the spark of a cover and the pivot of a title. Into the exhilarating blast of the unknown.