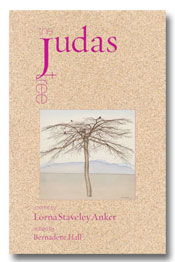 Bernadette Hall has edited The Judas Tree, a selection of poems by Lorna Staveley Anker (1914 – 2000). The book also contains a detailed bibliography of publications, chronological autobiographical notes and an introduction by the editor.

This poet was unknown to me and I was grateful that she was not only brought to my attention, but that I was able to place her poems within the context of her life and times. Having just reviewed a novel for The NZ Herald by an Italian author (Elena Ferrante) who insists on absolute anonymity, I have been musing on the usefulness of authorial contexts. Since Roland Barthes’ provocative ‘Death of the Author’ essay decades ago — and truckloads of theory on the role of the reader and the performance of ‘texts’ — I think it is very clear the author is not the sole authority on what is written/published. If we remove ‘authority’ from the cult of the author, then we might be left with authorial context (autobiography, social and cultural times, opinions and so on).  Thus, I welcome with open arms access to such details — along with a vital conversation on the practice of writing and reading fiction and poetry.

So a brief author context: Lorna was born in Christchurch. When she was two, her father died from throat cancer and her mother took in boarders to support the family. The mother’s grief was amplified by the death of her three brothers in 1918. Her mental state affected Lorna. Lorna married a fellow teacher, had five children and began writing and publishing in the 1960s. After the death of her husband, she became more public as a writer, with poems appearing in numerous journals and magazines. Her debut collection appeared in 1986, My Streetlamp Dances, with two more to follow. Lorna writes in an essay on women in wartime, ‘I am a war casualty.’ She suffered from night terror, agoraphobia, anxiety, panic attacks, and in her final years, Parkinson’s Disease.

Bernadette concludes the book with a moving set of acknowledgements — above all, to Lorna herself: ‘if she hadn’t been such a beautiful presence; if I hadn’t been invited to speak at her funeral; if I hadn’t suspected that the subversiveness of her conversation might be reflected in some hidden-away manuscripts; if she hadn’t brought up her daughter to be as fearless as she herself was, this book might never have come into existence’ (106).

Lorna’s poems reflect a mind that engaged with the world acutely, wittily, compassionately. There is a plainness to the language in that similes and metaphors are sidestepped for nouns and verbs. These are poems of observation, attention, reaction, opinion, experience. The starting point might be the most slender of moments — and the poetry opens out from there, surprisingly, wonderfully.

In the first section (and indeed the largest section), war makes its presence felt; from the pain of departures, to the pain of the wounded, to the ache of loss. At times Lorna filters a poem through the eyes of her young self (for example, trying to make sense of Armistice Day). At times a concrete detail makes the poem more poignant (‘her spade searching/ her garden for/ her three lost sons’). In ‘Arie’s Tale’ the detail that renders the pain sharper is the ‘tyreless rims.’ In this poem the dead are carried away on a bicycle that makes such a clatter it is the hardest thing to bear (‘He felt it wasn’t respectful/ to his customers’). Lorna’s war poems stretch in all directions — they never forget the life that goes on and they never forget the heartbreak and loss that are etched indelibly. One of my favourite poems, ‘V.E.Day … and Neenish Tarts,’ moves beautifully between these two opposing but entwined forces. From the darkness of battle (now over), the poem moves to the grandmother dancing on the bed (as warm flesh weaves/ pink circles/ under a nightgown’; and from there to ‘Let’s have Neenish tarts for tea’ (this is cause for celebration). This first section of the book is a terrific addition to New Zealand war poetry because it casts a light on women at war (even when they remain in the kitchen).

The remainder of the book shows that Lorna is more than a war poet. Her sense of humour is there in the dance with a tea-cosy upon her friend’s head. There is the recurrent political edge that marks a mind roving in the world (‘Every headline is grit in the eye’). There is the slight surrealness of the the house in Lyttleton that swells every night, ‘Since they widened the road.’ There is the stepping around poetic corners to re-view the facts or first impressions (The company agent (her father) collected all the statistics in his diary but would you guess ‘the uplands and plains/ of early Canterbury ever/ yielded beauty, colour, form’).

There are numerous poems that stand out (I love the compounding detail in ‘Recipe for Writing a Poem in the Dark’), but I want to finish with a peek at ‘Vision of Escape.’ In this poem a city is being traversed and the driver asks, ‘what is poetry?’ The poem then travels from ornate metaphor to gloomy night to stationary moment to ornate-but-cooler metaphor to stalled car. Ingenuous. The poet deftly moves in and out of reality and ‘the moment’ — and as the title suggests that is exactly what the pen does. Poems are as much the stalled car as they are the ‘green/ Aegean sea.’

Lorna’s collection is a delightful discovery. Her poems never sit still (do any?). They take you to grief and yet to laughter. Their linguistic simplicity is a gateway to a rich, reading experience. I am very grateful.

The editor Bernadette Hall is to be congratulated on bringing these poems to a wider audience. Bernadette lives at Amberley Beach in North Canterbury. She has published numerous collections of poetry including The Lustre Jug, and edited Joanna Margaret Paul’s Like Love Poems: Selected Poems. She was a judge for this year’s New Zealand Post Book Awards and co-founded the Hagley Writer’s Institute in Christchurch.

4 thoughts on “Lorna Staveley Anker: As much the stalled car as the cool, Agean sea”