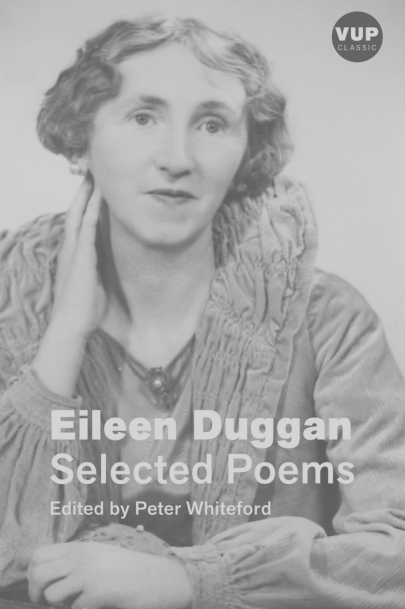 ‘When in Still Air’, ‘The Solitary’, ‘The Song of the Kingfisher’ and ‘The Tides Run up the Wairau’

Victoria University Press has recently reissued Eileen Duggan’s (Selected Poems edited by Peter Whiteford. Eileen was one of my three foundation stones in Wild Honey: Reading NZ Women’s Poetry (Massey University Press, 2019) and this was a go-to book for me, along with the extensive reading I did in the archives. I am delighted to see it back in print. Eileen also has boxes of unpublished writing – poems, letters, essays – lovingly stored at Catholic Archdiocese of Wellington Archives.

Here is an extract from my Duggan chapter:

It hurt Duggan deeply that her primary aim to write New Zealand, rather than her ancestral home of Ireland, was undervalued if not overlooked. In an undated letter to Alexander, she wrote: ‘I think Jessie and I were not of the past. New Zealand was our dream; it still is mine. Whatever they take from us we had the joy of the work and of the ideal and we knew the countryside — which, not the cities, is the real New Zealand.’[i] When a critic claimed that no real New Zealand poem existed, Duggan was cut to the bone: ‘My depression was generic as well as personal. I remembered that some of us had worn our bodies out and lived on the crust-line for the ideal of a national poetry.’[ii]

One of Duggan’s most anthologised poems, ‘The Tides Run Up the Wairau’, exemplifies her need for poems to be simple, musical and layered. Heart is entwined with the river of her birth; the poem represents the ebb of salt and snow, the river origins that stick with her in the Wellington streets.

The tides run up the Wairau
That fights against their flow.
My heart and it together
Are running salt and snow.

The poem, though, is also a veiled confession where love, like the childhood attachment to river and paddock, is hinted at. The lines are open to interpretation, but Duggan’s rebuttal of love as a young woman came to mind as I read.

Eileen Duggan (1894–1972), of Irish ancestry, was born in Marlborough and grew up in Tuamarina, near Blenheim. Duggan graduated from Victoria University of Wellington with an MA First Class Honours in History in 1918. She briely taught as a secondary-school teacher, and as an assistant lecturer, before devoting herself to writing full-time. She wrote essays, reviews, articles, a weekly column for the New Zealand Tablet (from 1927) and published five collections of poetry. Three collections were published in the United States and Britain to international acclaim. She left a substantial body of unpublished material, which Peter Whiteford drew upon for Eileen Duggan: Selected Poems (Victoria University Press, 1994). Duggan was awarded an OBE in 1937 and was made an Honorary Fellow of the Royal Society of Literature in 1943. She lived most of her adult life with her sister, in Wellington.