Helen Rickerby, How to Live

Helen Rickerby’s ‘Notes on the Unsilent Woman, Note 2’: ‘Perhaps the first thing you need to know is that women in ancient Athens didn’t get out much. No dinner parties, no debate, no public life. Unless you were already ruined. Or unless you were Hipparchia.’

Times have changed – and here we all are – to launch Helen Rickerby’s How to Live alongside AUP New Poets 5.

Before I talk about How to Live, I want to thank Sam Elworthy for supporting my wish to see the AUP New Poets series relaunched, for sharing my enthusiasm for poetry and projects generally, and for all he does for New Zealand poetry. I’d also like to acknowledge Elizabeth Caffin’s role in launching the series of AUP New Poets in 1999, and Anna Hodge’s support of the series under her editorship, and I’d like to thank the whole AUP team for everything they have done to support this beautiful collection of poems I love so much from Rebecca Hawkes, Sophie van Waardenberg and Carolyn DeCarlo. Most of all I want to thank the poets themselves for the extraordinary poetry which is setting this series back in motion.

I first knew Helen Rickerby when we were both fairly new poets ourselves, and I knew her poetry before I met her. I was very taken by her Theodora character in her first collection Abstract Internal Furniture, and the way the whole collection glitters with dark comedy, rapid shifts of scene, and exuberant detail. ‘I think I’ll edit out those long   silences’, she writes in one poem from that book, though even back then she was deciding to ‘leave in some of the shorter ones for effect.’

Now – several books of poetry and many years later – we have the book-length considered take on silence – and outspokenness – of How to Live: book-length because the ‘Notes on the Unsilent Woman’ which opens the book sets up questions and ideas that resonate all through the collection.

Notes on the Unsilent Woman, Note 53:

Hipparchia wrote treatises such as Philosophical Hypotheses, Epicheremas and Questions to Theodorus. Letters, jokes, philosophical refutations. All are lost. (Crates wrote Knapsack and Praise of the Lentil.)

A small note can say a lot, and it is a characteristic Rickerby move to pair the loss of intellectual history represented by Hipparchia’s lost treatises with the pointed addition of the titles of the work of Hipparchia’s more famous philosopher husband, to whose life she typically appears as a footnote, at best. His place in this note, in parentheses, after the main point is made, is just one of the many lightly undertaken total overhauls of intellectual history this book of poetry offers.

Its own title – How to Live – indicates its philosophical reach: this is a book that asks the biggest questions. The title poem references Susan Sontag, Helen Keller, Empedocles, Adorno and other philosophers and writers, alongside friends discussing the big questions in person and on facebook – ‘I am forever putting my friends in’, Helen confesses, and her friends are forever finding themselves caught up in extended conversations that take in the details, big and small, of their own lives.

The collection as a whole takes in questions such as how to choose a good fork or how to choose a house; how to read and how to listen; when we choose to suffer – ‘It all depends on / what the other choice is’ – and the question of what poetry is for, what is poetry? It is an urgent question for a poet constantly questioning her own practice, constantly experimenting with form: about the prose-like appearance of some of these poems on the page, she says, ‘I have long struggled against the tyranny of the line break. Am I afraid that if I let the words leak out, they’ll mix with oxygen and become prose?’

What happens in fact is a collection which rewrites the boundaries of poetry and prose to dazzling effect, as, for instance, the interest in portraiture that goes right back to the Theodora character of her first book now gives rise to entirely new forms of biography – the sharply comic, occasionally personal, often poignant and brilliantly illuminating verse essay on George Eliot, in thirteen numbered sections (with sub-sections); the ‘poem for three voices’ moving between the perspectives of Mary Shelley, Victor Frankenstein and the monster himself; the meditation on the life of Ban Zhao as palimpsest, pillow book and personal essay.

If Helen Rickerby is New Zealand’s most intellectually exciting writer (and I think she is), it is not although but because she writes always as a poet, with a poet’s interest always in form.  And it works just as well to turn the equation around to say she is one of the most formally innovative poets in New Zealand, because her interest in formal innovation is always driven by the intellectual ideas she grapples with.

And she’s funny. For all its formal interest and intellectual brilliance, what I really most love about the book is the voice – but for that, I can do no better than to hand over to Helen herself. 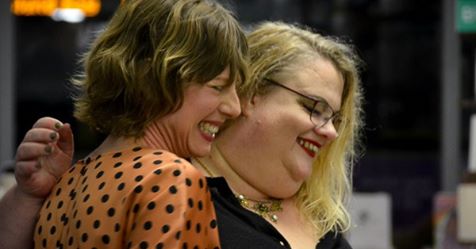