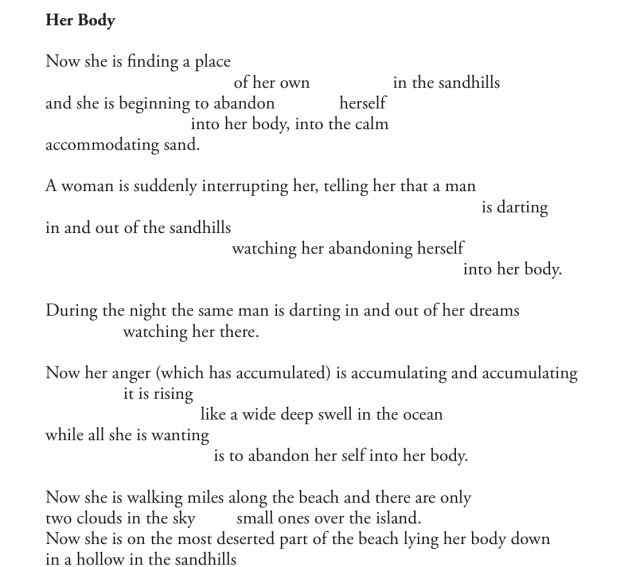 Dinah Hawkin’s Small Stories of Devotion was the first collection of contemporary NZ poems that had a big impact on me as a young woman. The collection was published the year I went flatting for the first time.  My flatmate had a copy, and I was attracted to this beautiful small blue book and it’s pocket-sized format. I hadn’t been exposed to much contemporary poetry, and it was a revelation to find work that spoke to me so directly. ‘Her Body’ is all tangled up with that time in my life where I was emerging and coming into myself as an adult. A time when I was encountering lots of new ideas about how to live, how to be in myself and in my body. This poem in particular spoke to those themes, as well as being a gateway into the world of NZ poetry. Now I read it and appreciate a layer of memory folded into its mix including a fondness for that younger woman and her questioning self. I love the poem’s rhythm, the place of the poem playing itself out, that long beach, those sandhills, the island and its two clouds. It surges and retreats, echoing the waves and the words lapping up the beach and across the page.

I enjoyed its anger (“accumulating & accumulating”), its passion and release.  I was spending a lot of time myself walking on beaches while having big existential conversations with my new friends about the world we wanted to live in, and about our sexuality and gender politics in particular. ‘Her Body’ encapsulated that exploration and the feminism that was so often at the heart of our conversations. I was she, the powerful sensual voice of the poem, the woman abandoning herself into her body. And alongside all that, entwined, the natural world, informing everything, settling on everything. A potent combination and one I’ve continued to enjoy in Dinah’s work.

Dinah Hawken is a poet who lives in Paekakariki on the Kapiti Coast. Her seventh collection of poems, Ocean and Stone, was published by Victoria University Press in 2015.