Last night I drove into the city into some kind of warm, semi-tropical wetness —like a season that no longer knew what it ought or wanted to be — to go to the launch of Tusiata Avia’s new poetry collection. Tautai, the Pacific Art Gallery, was a perfect space, and filled to the brim with friends, family, writers and strong publisher support. I loved the warmth and writerly connections in the room. I have been reading Tusiata’s book on planes as poetry now seems to be my activity of choice in the air. I adore this book and have so much to say about it but want to save that for another occasion. I was an early reader so have had a long-term relationship with it.

The room went dark and an MIT student, bedecked in swishes of red, performed a piece from a previous collection, Blood Clot. Mesmerising.

Tusiata’s cousin and current Burns Fellow, Victor Rodger, gave a terrific speech that included a potted biography. I loved the way he applauded Tusiata not just as a tremendous poet, but as a teacher and solo mother. Her names means artist in Samoan and he saw artist in the numerous roles Tusiata embodies. Writing comes out of so much. He identified her new poems as brave, startling, moving and political. Spiky. I totally agree.

Having dedicated her book to her parents, Tusiata said that it was hard to be the parent of a poet who wrote about family. When she told her mother what she was writing, her mother embraced it. She opened her arms wide. She said the skeletons need to come out. The atua. Tusiata’s speech underlined how important this book is. It is not simply an exercise in how you can play with language, it goes to the roots of that it means to be daughter, mother, poet.  It goes further than family into what it means to exist, to co-exist, in a global family. When a poet knows how to write what matters so much to her, when her words bring that alive with a such animation, poise and melody, it matters to you.

Four poems read. Lyrical, song-like, chant-like, that place feet on ground, that open the windows to let atua in and out, that cannot turn a blind eye, that hold tight to the love of a daughter, that come back to the body that is pulsing with life.

Yes I had goose bumps. You could hear a pin drop.

Fergus Barrowman, VUP publisher, made the important point that these poems face the dark but they also face an insistent life force. 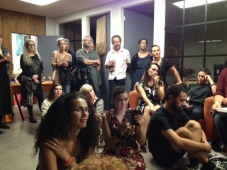 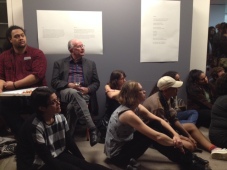